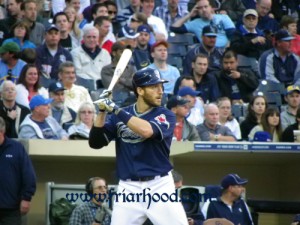 The Padre brass have been consistent when outlining their offseason strategy of adding starting pitching to a roster they otherwise  feel is essentially set. Friar fans would tend to agree with that plan but one spot on the field that many followers of the team would like to see upgraded is RF where the club plans to roll out Will Venable and Chris Denorfia again in a platoon situation. Those fans seem to prefer chasing a big bat to play in right (though few were available at the outset of free agency) but paying market value for said bat to replace the Venable/Denorfia combo would be a waste of precious resources (i.e. payroll).

Separately, neither Venable nor Denorfia is what I would consider even an above-average starting caliber corner OF. Neither has the power teams usually covet in a RF. However, together Venable and Denorfia form a combination that produces more offense than that which other teams get from their primary starter at the position. Here’s a look at how the Venable/Denorfia duo measures up to the 29 other starting RF in baseball.

The Friar RF platoon outperforms the average RF in each of the above offensive categories.

In addition the cost-conscious Padres benefit further as Venable and Denorfia earned just a combined $2.64MM last season. The average salary paid to starting RF in the majors last season was about $6.15MM. The Friars paid 57% less for top-10 production in terms of OPS from their RF platoon than the average club paid out to their stating RF last season. Seems like a solid ROI to me.

In fact, of the ML starting RF last season to earn less than the Venable/Deno duo, only Jason Heyward (.814) and Giancarlo Stanton (.969), two terrifically talented young stars, outperformed Venable/Deno in terms of OPS.

If I were to tell you the Padres would have a guy playing in RF in 2013 that will hit .277 with 18 HR and 81 RBI while stealing 37 bases you’d probably take that. That’s exactly what Venable and Denorfia combined to do last year even playing half of their games at Petco. Only Chase Headley exceeded that HR and RBI total last season for the Friars and just Everth Cabrera eclipsed that number of SB.

On the flip side of the coin, the duo did struggle defensively a year ago posting a cumulative -18.4 UZR/150 in RF. Of course defensive metrics are not exactly as refined as well as offensive numbers so a look at their career UZR/150 would be a better indicator of defensive prowess than a single-season snapshot. For their careers, Venable and Denorfia are a combined +14.0 UZR/150 in RF. That number would have ranked 6th in the majors last year in that category.

Another area that the Friars RF platoon excels at is on the basepaths. As noted earlier, the two stole a total of 37 bags last season and were caught just 11 times. That’s a success rate of better than 77%. In fact, Fangraphs tells us the duo was worth 4.7 wins above replacement based on their base running alone.

Speaking of WAR, Venable and Denorfia were valued at 4.5 WAR last year and that was enough to place the Friars 10th overall among all ML teams in terms of value received from RF.

No matter how you look at it, the Padres received top-10 production from their RF platoon for a fraction of the cost other teams shelled out to fill the position. Since neither Venable nor Denorfia had what would widely be considered a career season it stands to reason we can expect similar production in 2013. Considering the FA and trade options available this winter and the cost to acquire one of those options the Padres were wise to stick with their RF platoon.