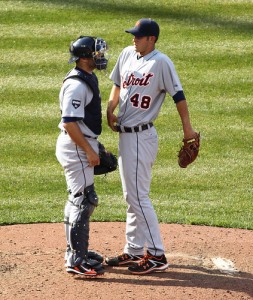 The Tigers decided to lock down Anibal Sanchez for five-years, $80M.  Which once again opens the door to trading Rick Porcello.  According to Jim Bowden via Twitter, the Padres are one of the teams interested.

Ben Nicholson-Smith of mlbtraderumors.com believes the largest needs for the Tigers are a lefty reliever and a right-handed corner outfielder.