Padres Talks with Edwin Jackson are Heating Up 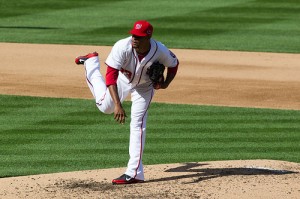 For those fans that have wanted to see the Padres New Ownership flex some muscle, your time may be here.  With most of the free agent starters off the market, Jackson and 34 year old Kyle Lohse are the best names available.  If Jackson were to sign, the Padres would be the eighth team for the 29 year old.

Our own Brandon Cline made his case for Edwin Jackson earlier this week.  If Jackson does sign he would compete for (and should win) the opening day start and join a group that includes Jason Marquis, Edinson Volquez, Clayton Richard, Eric Stults, Casey Kelly, as well as Andrew Cashner, Cory Luebke, and Joe Wieland when they return from injury.

In the latest Rick Porcello news, according to ESPN, the Tigers are targeting bullpen help, which would make them a perfect fit for the Padres.  With Luke Gregerson and Joe Thatcher available, the Padres could make a move for Porcello.

Two cents: Although I do feel the Padres still have offensive needs, the addition of Jackson and Porcello would help the rotation dramatically and allow the Padres to move Volquez.  Volquez inability to throw strikes consistently makes him a liability in Petco and he would be better suited on another team.