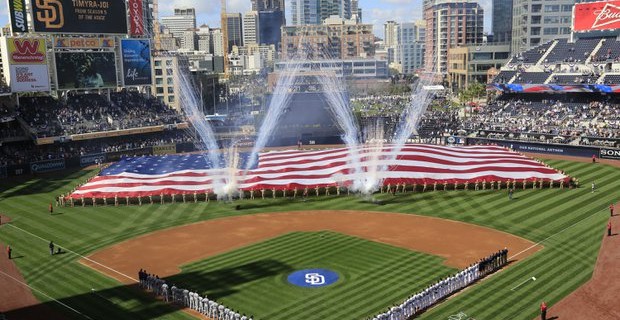 It’s been almost 23 years since the phrase “All-Star Game” was said with any legitimate purpose in San Diego, but you can never be too late when it comes to that sort of thing. The San Diego Padres and Major League Baseball officially announced this morning that the All-Star Game would be hosted at Petco Park in 2016.

The Padres haven’t hosted an All-Star game since the 1992 mid-summer classic at Jack Murphy Stadium, and that game was certainly a memorable one for the Padres. The team sent 5 players to the All-Star game that year, including 3 of the games starting-9 to initially take the field. Included on the list of players for the Padres were Tony Gwynn, Fred McGriff, Benito Santiago, Gary Sheffield, and Tony Fernandez.

It seems only fitting that the Padres would get the All-Star game now after all the team has worked for, given the recent aesthetic upgrades to the park and the acquisition of All-Stars Matt Kemp, Justin Upton, and Derek Norris. With any luck, former All-Star Josh Johnson will also have a chance to regain his former glory with the newly muscled Padres on the field as well.

Needless to say, there’s a lot of excitement surrounding this morning’s announcement.

The 2016 All-Star Game is coming to @PetcoPark. What an exciting day for the City of San Diego!

Congrats to all of the team that worked so hard to make #ASG16 happen @PetcoPark Very excited for San Diego!

Exiting-Commissioner Bud Selig made this statement in regards to the announcement that the game would be returning to San Diego: “I am very pleased to award the 2016 All-Star Game to the San Diego Padres, who made a detailed and comprehensive bid in conjunction with city officials.”

“San Diego is one of America’s most beautiful cities… and showcasing Petco Park in its thriving downtown will be a remarkable opportunity for the Padres franchise and all of Major League Baseball.”

Certainly, everything has been leading up to this. The game is set to take place on Tuesday, July 12, 2016.

While the details of the All-Star game are still being worked on, it is certain that the game will take place in San Diego. With any luck, some of that ealy-90’s magic that dazzled fans in San Diego and across the country will carry on into next year’s contest.