Join the Congregation!|Tuesday, April 13, 2021
You are here: Home » Glen Miller » Padres Trades that Would Blow Your Socks Off

Padres Trades that Would Blow Your Socks Off 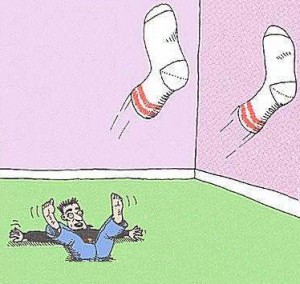 I’ve got to give credit to Ron Fowler for helping to get the creative juices flowing this week. While attending a lecture at San Diego State, the Padres CEO stated that about a week-and-a-half ago the Friars were presented with a trade proposal that had GM Josh Byrnes pulled the trigger, “would have blown the socks off people in this room,” (speaking of the media in attendance presumably). This has led me to wonder not just what trade Byrnes may have been looking into but what type of deal would “blow the socks” off of Padres fans. Here are five examples of deals that would probably knock our socks off along with hypothetical rationales behind each.

New York GM Brian Cashman promises to reveal the secret to the Yankees two decades of success if Byrnes makes this deal. The Padres plan to move A-Rod to SS and insert prospect Jedd Gyorko into Headley’s old spot.

“It was an opportunity we couldn’t pass up. We’ll miss Chase tremendously but being able to acquire a surefire first-ballot Hall-of-Famer and one of the game’s preeminent sluggers was just something we had to do. A-Rod plays a key position on the diamond and does it well. It’s a great day for Padre fans,” said Byrnes.

When asked about Rodriguez’s recent decline in production and advancing age Byrnes said, “There is risk involved in any trade. But we’ve done our homework and we feel Rodriguez still has plenty of gas left in the tank.”

Byrnes reacted angrily when asked about the five years and $114MM left on Rodriguez’s contract. “What do you want from us exactly? You complain when you don’t think we spend enough money on players and when we do spend some money you question whether it’s a good move or not. I’m getting sick of it. You just don’t want to give us credit for anything, do you?”

With a surplus of OF talent, Angels GM Jerry DiPoto cashes in some chips in an effort to fill a couple of roster holes. Gyorko will take over at 3B allowing Alberto Callaspo to move into a utility role. Richard will stabilize the rotation while Kelly instantly becomes the Halos best pitching prospect. Gregerson and former teammate Ernesto Frieri give the Angels a pair of shutdown relievers to hold down the seventh and eighth innings in front of newly signed closer Ryan Madson.

On why DiPoto was willing to move Trout to shore up other areas of his roster: “We have another very capable CF in Peter Bourjos and we also have Hamilton who can play there in a pinch. We tried to move Wells (OF Vernon Wells) but no one but Tony Reagins would touch that contract and he isn’t a GM anymore. Our starting pitching was a little light so we’re thrilled to add Clayton to the rotation mix. Gyorko, we feel, is going to be an excellent everyday 3B and we’ve improved our bench by moving Callaspo to a super utility position. At the end of the day we gave up a great talent in Trout but we filled several holes with this trade and our roster is stronger as a result.”

Padre GM Josh Byrnes is elated to add Trout to the Padres OF. “We value defense a great deal and with the spacious OF at Petco having a guy like Trout joining Cameron (Maybin) will allow us to field one of the better defensive OF in the game today. We also really like Trout’s all-around offensive game. He can do a little bit of everything and he’ll improve this team in a number of ways.”

Citing the 50-game suspension to be served by Grandal and lackluster defense at 1B from Alonso, the Padres pull the trigger on a deal sending the two former University of Miami teammates back to their home state. In return the Friars add rotation candidate Jeff Niemann and 1B James Loney.

“Loney is excellent with the glove and people seem to have forgotten he has twice driven in 90 runs with another season of 88 RBI under his belt. We think he’ll get back to being a top-notch run-producer for us,” Byrnes said.

“Niemann will get a chance to join our rotation and we think he can be an effective mid-rotation arm four us.”

“We hate to give up Grandal in particular but we’re in win now mode and with his suspension he wasn’t going to be in position to help us much anyway. We’re confident that Nick (Hundley) and John (Baker) will be more than adequate behind the plate and give us a chance to win every day.”

In a three-way trade, the Padres acquire SS Elvis Andrus, the Rangers receive OF Justin Upton and SS Everth Cabrera and the Diamondbacks get RP’s Luke Gregerson and Joe Thatcher and SP Casey Kelly.

The Rangers get the OF they want in Upton and an infielder, Cabrera, that can fill in at multiple positions and steal some bases. The Padres get a premier player at a premium position and the Diamondbacks get pitching.

Towers: “You can never have enough pitching and we got three talented arms in this deal. I think we’ll have the best bullpen in baseball with Gregerson and Thatcher joining Heath (Bell), JJ (Putz) and David (Hernandez). We’ll be playing a lot of five inning games with those guys around to close out. Everyone knows I love me some relievers.”

Daniels: “We hate to give up Andrus but the chance to get Upton and a player similar to Elvis in Everth was too much to pass up. We’ve been hot on Justin for quite some time and I am grateful the Padres were able to jump in to facilitate the trade. This is the culmination of many hours of hard work and we’re glad we got the player we’ve targeted for quite some time.”

Byrnes: “Simply put we got a player that’s very similar to Everth but who is much better. I can grow relievers on trees and we took advantage of Kevin’s insatiable desire to stockpile replaceable bullpen pieces to add an impact talent at SS. With Elvis setting the table in front of Chase, Yasmani, Yonder and Carlos we expect to have a potent offense.”

The Padres get one of the game’s best starting pitchers after the Mariners finally realize they have no hope of contending while they still have Hernandez under contract.

Jack Zduriencik: “It wasn’t an easy decision to make this move but we took a hard and honest look at our organization. We’re just not going to be any good for a while. Our best prospects are two or more years away from contributing here.

We feel real good about the potentials of Liriano and Kelly to develop into stars and Cabrera and Hundley address weaknesses on the current roster.

In all seriousness I just got tired of answering all of the questions from you guys about when or if we were going to trade Felix. I figured by making this trade we’d finally have something new to talk about. Face it; you media types aren’t very imaginative when it comes to asking questions. It got to the point where I hated doing interviews and press conferences. You were all boring me to tears. Now, at least for the time I have left as GM of the Mariners, we can talk about giving Felix away as a fact instead of as a hypothetical.”

Byrnes: “Yes, we love Rymer and believe he has superstar potential. That being said you rarely get an opportunity to add a legitimate staff ace signed to a reasonable contract and that is exactly what Felix is. I would have happily included more trash, I mean, assets if Jack had asked.”

I hope all of you know these trade ideas were all intended to be ridiculous and meant to be humorous. That of course includes the “quotes” I attributed to the GM’s involved in these purely fictional trade scenarios. I still have no idea what knock-our-socks-off-trade Fowler may have been talking about or what players may have been involved. All I know is that statement has allowed me to entertain the impossible for a bit.