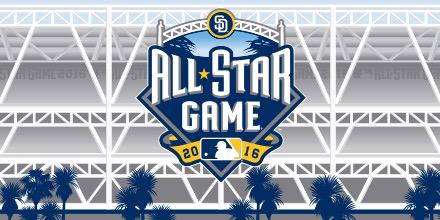 On Friday morning at Petco Park, before the resumption of regular season play, the Padres unveiled the official logo for the 2016 MLB All-Star Game, in preparation for hosting the Midsummer Classic a year from now.

“The Cincinnati Reds really embraced the All-Star Game, and it was a sea of red. We’re looking for a sea of blue here in San Diego for our All-Star Game,” Chairman Ron Fowler told the press Friday morning. Fowler, Mike Dee, and A.J. Preller were all on hand in Cincinnati earlier in the week for this year’s All-Star festivities.

The logo features a navy blue, baby blue, and light yellow design with palm trees silhouetted in the background. The actual “All-Star Game” lettering is in a font very similar to the one seen on the “San Diego” of the Padres’ past away uniforms.

The color combination may hint at a new color scheme for the Padres uniforms going into next year, as rumors have surfaced that San Diego does plan to change uniform design and color for the 2016 season.

For San Diego, a team which has historically not been given much national media attention, the game represents an opportunity to showcase the Padres, and America’s Finest City.

Another factor to consider with next year’s All-Star Game on the horizon is whether or not any Padres themselves will in fact be voted to the game.

At the year’s beginning, one could assume that San Diego would have at least two or three representatives in Cincinnati, yet on Tuesday, outfielder Justin Upton remained the lone Padre present at Great American Ball Park. Upton represented the club well though, with a sharp single off Kansas City’s Wade Davis, and then a stolen base to follow.

While Upton was able to jump on his opportunity in Cincinnati, San Diego fans will presumably still need to come out in full force and vote as a community, if they want a strong presence at next year’s Midsummer Classic. Before Upton’s appearance on Tuesday, it had been four years since fans had actually seen a Padre play in the All-Star Game, the last appearance coming in 2011 when Heath Bell entered in the eighth inning.

A hometown favorite surely has the ability to bring fans out to the game, as well as the All-Star Week festivities, which span over five days. In previous years, star players who have been able to perform in their home ballparks have thrived on their home turf. Take Matt Harvey of the Mets, when New York hosted in 2013, or, more significantly, the Reds’ Todd Frazier this year in Cincinnati, as Frazier became the first player ever to win the Home Run Derby the year after finishing runner-up.

All-Star Week consists of much more than the All-Star Game itself, as events include FanFest, the All-Star Color Run 5K, All-Star Sunday (encompassing the Futures Game and the Legends and Celebrities Softball Game), the Home Run Derby, as well as an All-Star Concert and the All-Star Summer Block Party.

In years past, we’ve seen everything from Arizona Cardinals wide receiver Larry Fitzgerald, when the game was hosted at Chase Field in 2011, to actor and New York native Kevin James, when the Mets hosted two summers ago. With it known that fans will most definitely see the likes of Steve Garvey, Dave Winfield, and Trevor Hoffman in the game, who else could fans possibly see?

Professional golfer Phil Mickelson? Local skateboarding legend Tony Hawk? What about local musicians Tom DeLonge (blink-182, Angels and Airwaves), Jon Foreman (Switchfoot), or Eddie Vedder (Pearl Jam)? In fact, all three would make great candidates to perform the All-Star Concert or other live music throughout the week. How about Chargers quarterback Philip Rivers? Plus, his accomplishments as a surfer are unrivaled, but how awesome would it be to see Cardiff’s own Rob Machado swing a bat?

The opportunities are ample, and the Padres have a real opportunity to make the game one to remember.

The Padres’ ownership group has recently expressed motivation to spread All-Star Week activities out across the city of San Diego, and not limit them exclusively to the downtown area near Petco Park. With this said, some notable local landmarks to think about for next summer include the San Diego Bay, Old Town, Balboa Park, and the historic Gaslamp Quarter, which is situated in the heart of downtown, next to Petco Park.

Moving forward, fans can expect to hear and see more, as the date of the 2016 All-Star Game draws closer; today’s logo unveiling kicks off a yearlong countdown to the Midsummer Classic’s returning in San Diego next July.

While this morning’s events give reason for San Diego to be excited about the future, the second half of the 2015 season does resume for the Padres tonight at 7:10 pm, as they welcome the Colorado Rockies to begin a ten game home stand at Petco Park. The rest of the season ensures to be one of the most important ever for San Diego, after the team has played well under expectations during much of the first half.

“At this point, I haven’t given up on the team,” Justin Upton told the press earlier this week in Cincinnati. “We still have some time to change the minds of the front office. In a perfect world, we play well over the next two or three weeks and A.J. [Preller] pumps the brakes on dismantling the team.”