Players of the month: April 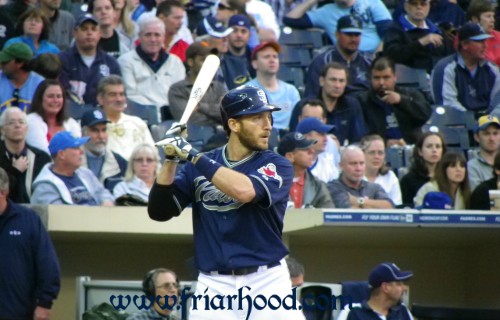 With as bad as the offense has been so far, finding a positive offensive player is tough.  Deno might have only posted a .3 WAR but it beats everyone else, so he’s our man.  The outfielder also quietly collected 5 steals to lead the team in the season’s first month.  Denorfia was also difficult to strike out, ending the month with only 11, which was the 2nd smallest number among regular starters.  Given this team’s proclivity for punching out, this is a welcomed asset.

Surprise!  Andrew Cashner may seem like the obvious choice here as he anchors the staff.  However, the numbers do not lie and Kennedy was superior in the season’s first full month.  Keep in mind, Cashner’s magnificent opening night win against the Dodgers was in March.  Kennedy is showing the promise of a pitcher returning to the form that made him a Cy Young candidate just a few seasons ago.  Kennedy’s K/9 rate is currently impressive and a full point higher than his career number of 8.  It is a number that, if it can be maintained, should continue to spell success for the veteran.