Join the Congregation!|Thursday, June 24, 2021
You are here: Home » Glen Miller » Plethora of Padre Injuries Is Troubling

Plethora of Padre Injuries Is Troubling 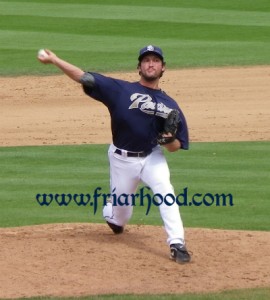 The injuries continue to mount for the Padres with news that 3B Chase Headley will miss at least the first two weeks of the regular season with a broken thumb. That’s on top of word that pitching prospect Casey Kelly would be undergoing Tommy John surgery consequently ending his 2013 season before it even started. Usually I think injuries are a function of bad luck but after so many in the last couple of years I’m starting to question whether it’s that simple or if the Padres are at least partially to blame.

Adding Kelly to a list that already includes Rymer Liriano, Joe Wieland and Cory Luebke has me wondering how any team can have so many season-ending Tommy John surgeries in less than a year. Luebke signed a rich extension last year and was expected to front the Friars rotation for the next several years but instead he is still rehabbing from surgery. He’s expected back sometime this summer but there’s little chance he will be able to pitch as effectively right away so soon after surgery.

Liriano, Wieland and Kelly were all among the Friars top seven prospects according to MLB.com. So three of the players the Padres were hoping could make an impact within the next couple of seasons are losing a year worth of their development. For a team that wants to construct their roster using players drafted and developed from within losing three premium pieces for a year or more is a big step backwards.

I really don’t want to point fingers at the training staff or anyone else but it gets to a point where I have to wonder if there is something they aren’t doing or something they are that is playing a role in these injuries. I believe in chance and luck but I also believe that sometimes you make your own luck, good or bad.

Back to Headley for a minute, Steve posted a piece talking about the Padres plans to replace Headley in the short term. His plan is to platoon Gyorko with Cody Ransom depending on the pitcher. Cody who?

Now for his part Ransom has been an above-average hitter versus LHP in his career, albeit in just 273 plate appearances. Still, he’s never been more than a part-time player so the Padres can’t expect him to suddenly fill Headley’s production even if it’s just for a couple of weeks.

That leads us to Gyorko. Steve pointed out that if Gyorko begins the season with the Padres and remains on the roster for the full season he will attain super two status and be eligible for arbitration following the 2014 season. That means he will begin to get very expensive sooner than if he began this season in the minors. For a small-market (i.e. small payroll) team those are considerations that can’t be taken lightly.

Of course the situation isn’t made any easier given the injuries to Logan Forsythe and James Darnell; both of whom played 3B when they were drafted by the club. If one or both were healthy it could have made the decision on Gyorko a little easier. But again injuries are complicating matters.

That actually provides a perfect segue to talk about other decisions the Padres have made involving injuries. Last year they decided it was best to extend Carlos Quentin and Huston Street before they reached unrestricted free agency despite the checkered injury troubles both players share. I liked the Quentin extension and could live with the Street deal when they were announced and while I am not ready to alter my thinking I am growing concerned that the Friars may have optimistically committed too much money on two injury risks.

Quentin in particular is worrying me with his troublesome knee. At what point does that thing get called “chronic?” He had problems with it last spring causing him to miss a big chunk of the beginning of the year and after another surgery in the winter still is having trouble getting on the field. I’m wondering if his knee will ever be 100% again and if it isn’t he won’t be able to play a full season as the Padres LF. His bat is still potent enough to be of value to the team if he gets some plate appearances at DH and can get into 135+ games but I don’t envision getting any more than that. Plus, if the knee problems persist it could impair his ability to be a threat with the bat.

Every spring brings new expectations and anticipation for the new baseball season. I was at least hopeful of an exciting team capable of staying in contention for a while. All of these injuries are putting a damper on the start of the new campaign and I just have to hope that they don’t continue to present problems for the Padres going forward.