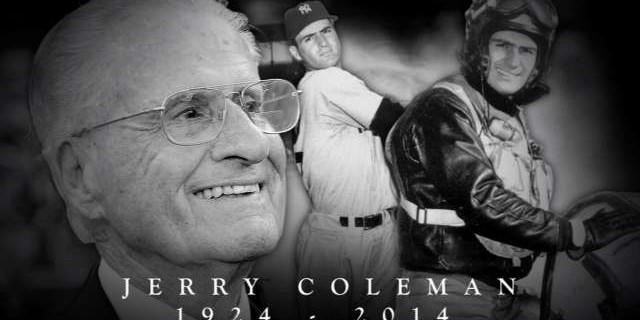 Jerry Coleman was an institution.

He was a fixture like the columns that support a building; something Padre fans, and San Diegans in general, counted on each summer.

Yes, the degree to which fans instantly connect his voice with the Padres is on the level as Vin Scully is to the Dodgers and Harry Caray to the Cubs.  You hear Jerry Coleman and you can instantly see baseball caps with interlocking S and D on the front.

If it is possible to hear a smile, listeners got the chance with Jerry.  His love for the game set him apart.  Jerry was old school.  He didn’t rely on catch phrases, although he did have some.  He wasn’t trying to paint a picture of the field.  He wanted you to feel how the players felt.  There is something special when Jerry would explain why a certain play was much tougher than it looked.  He wasn’t saying it to describe the action.  Jerry said it so the world would appreciate what a human being, with their own emotions, just accomplished.

Jerry wasn’t an entertainer; at least he wasn’t trying to be.  Jerry was trying his very best to help fans, and non-fans, love the game of baseball.  Jerry called the game the way a 9-year-old looks at the game: with wonder.  When players made a great play, he got excited as if he’d never seen that particular play before, even though he had.  Jerry wanted the players to succeed.  Not because he wanted the team to win but because he knew how happy it would make the player as a person.  Jerry knew this game was very difficult to play well.  He was glad other people got the chance to enjoy it the way he did.

Padre fans will likely never truly appreciate Jerry Coleman the way he deserves.  Stop and think for just a moment how special it is to get to listen to an announcer who 1) managed a Major League team, 2) played for the Yankees in their heyday, 3)became a member of the National Baseball Hall of Fame.  Yes, you took him for granted, just admit it.  I know I did.  Jerry’s stories, while often whimsical, were always rooted in real-life experience.  He recalled things that happened to him, not things that happened to other people that he happened to see.

Despite all of the praise for Jerry Coleman, the irony is he would deflect everything that’s being said about him now.  Every time anyone tried to tell him about his merits as a war hero, broadcaster or baseball mind, Jerry tried to change the subject.  Humility is its own reward.  Jerry was humble.  Never condescending or disingenuous.  Jerry just didn’t need to hear about himself.  Again, as was his style, he wanted others to feel the spotlight and feel uplifted.  Jerry knew every moment spent honoring him was a moment not spent on someone else.

I was invited to “Bloggers Night” at Petco Park this past August.  I was on the field for batting practice.  I met with Buddy Black and Josh Byrnes.  It was amazing but, in the end, I stand by a tweet I sent out that said: highlight of the night was meeting Jerry Coleman! #legend

I got to meet the Colonel and I am very glad I get to write those words.