Join the Congregation!|Thursday, April 15, 2021
You are here: Home » Prospect List » Renfroe Ranked No. 2 in the Northwest League

Renfroe Ranked No. 2 in the Northwest League 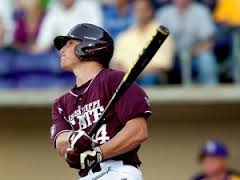 Unlike the first list by BA, the Padres have only one player that made the Top 20 in the Northwest League. That one player is ranked No. 2 overall behind Cubs prospect, and USD product Kris Bryant. The lone Padre to make the list is the No. 13 overall pick in the 2013 MLB Amateur Draft, outfielder Hunter Renfroe.

This season with the Eugene Emeralds, Renfroe had a slash line of .308/.333/.510 through 25 games with nine doubles and four home runs in 104 at-bats. His performance in the Northwest League was good enough to earn him a promotion to the Midwest League where he ended his season with the Fort Wayne TinCaps. However, Renfroe didn’t finish as strong as he started. Through 18 games with the TinCaps, he had a slash line of .212/.268/.379 with five doubles and two home runs in 66 at-bats. He turns 22-years-old next January.