Stanton is a Go 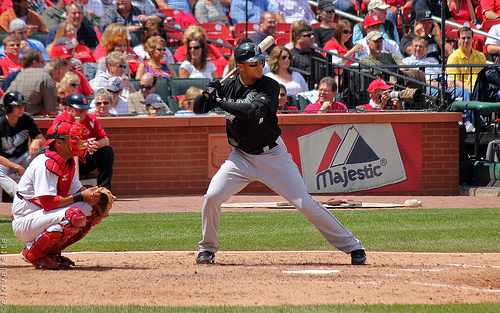 I know, I know, you’re probably tired of hearing about Giancarlo Stanton being connected to the Padres…honestly, I am too. There’s been talk about them possibly being interested in him for the past year or so, but nothing has been close. Many teams would love to slide Stanton into the heart of their line-up, and some have the resources to pull-off a trade, but recently, Jim Bowden of ESPN reported that Marlins GM Dan Jennings said, “Stanton is not available…We are building around him.”

I could care less about what their GM says…I’m of the mind set that any player is available at the right price. First off, the Marlins’ right fielder made it clear last offseason that he wasn’t happy with the blockbuster trade that sent Jose Reyes, Josh Johnson (now a Padre…we’ll touch on him later), Mark Buehrle, John Buck and Emilio Bonifacio to the Toronto Blue Jays for Yunel Escobar (later traded to Tampa Bay) and a handful of prospects. In fact, on his Twitter account he said he was “pissed off!!! Plain & Simple.” Fellow outfielder Bryce Harper even reached out to Stanton on Twitter saying, “you can always come play for the Nats! We will take you anytime! Get some red, white, and blue in your life!” Naw, I’m pretty sure he’d rather rep the best uniform in all of baseball…that of the San Diego Padres.

A week ago, I wouldn’t have been advocating a Stanton-to-Padres trade. I’d been dreaming about one for a while, but it just didn’t seem realistic until this past Wednesday when the Padres announced the official signing of right-handed starter Josh Johnson to a one-year deal. That move made it clear to me that the new ownership is willing to take some risks. Johnson is a two-time All-Star and was once considered one the most dominant pitchers in the game. Injuries have riddled his career however, which is why the Padres were able to land  him, a potential ace, for only $8MM with $1.25MM in incentives. Now, here’s a look at what the Padres’ 2014 rotation might look like:

Looks pretty solid to me. Yes, there are a lot of “ifs”, but what rotation or line-up doesn’t have them? The Padres took a risk on Johnson, and now it’s time to take one on Stanton.

Come on Josh Byrnes, Mike Dee. Just call-up the Marlins and say, “Here’s the deal: you can have any 3-4 prospects you want and we’ll also throw in Kyle Blanks and/or Logan Forsythe.” Catcher Austin Hedges is high on my list of Padres prospect and I wouldn’t want to see them part with him, but I’d be alright with them packaging Max Fried, Matt Wisler, Rymer Liriano, and Cory Spangenberg in a deal. It seems like a lot to give up, but four unproven minor leaguers for a 24-year-old slugging right fielder? It’s a risk worth taking.

2014 will be Stanton’s first season in arbitration, and according to Tim Dierkes of MLBTradeRumors.com, he should make about $4.8MM. Padres can easily afford that. However, expect his price to go up in 2015 and 2016 before he is eligible for free agency in 2017. Can the Pads work out a deal before then? That would be an even bigger test than the Chase Headley situation. If they can’t figure something out though, a trade is always an option. Multiple teams should still be interested in him at age 26 (his final season before free agency) unless of course injuries become a big question mark, or if he has a decline in his offensive numbers. Still though, any deal a team makes isn’t a sure thing…it’s worth the risk.

For those of you who are tired of hearing about Stanton to the Padres, this post is a little shorter than some, but if you want to continue the discussion into the comments section, be my guest.