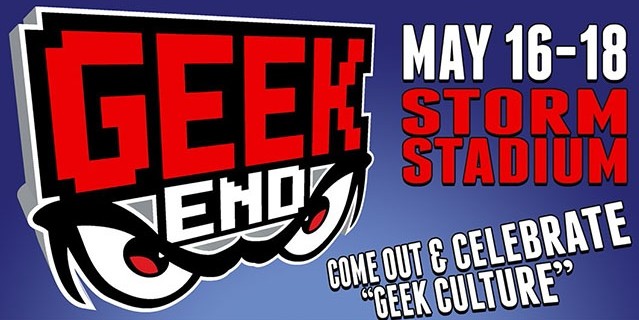 The Padres Single-A Advanced affiliate Lake Elsinore Storm put on their first ever “GeekEnd” promotion this past weekend, where the team celebrated the various aspects of “geek” and sci-fi culture. Fans were given the opportunity to attend the games for free by dressing in full costume garb and participating in the activities at the park. Friday night celebrated the culture of Comic-Book superheroes and Saturday commemorated the 9th year of Storm “Star Wars Night.”

Fans still have a chance to attend Sunday’s “Ren’Eye’Sance Day” where fans can dress in medieval attire and also view an actual knight sword battle on the field after the game.

The Diamond has seen costumed characters invade the stadium all weekend long, including appearances from Darth Vader, Boba Fett, Captain America, Spiderman, and even the Padres own swinging Friar dressed as a Jedi to aid Thunder in combatting the Sith.

The Jumbotrons in left and right field aired segments of a “Star Wars” themed mini movie entitled “Storm Wars” for the enjoyment and wonder of fans young and old. Even some of the players got into the spirit by having their pictures on the screens depict themselves as Jedi warriors with lightsabers instead of bats.

In addition to the fanfare and costumed calamity, the Storm also held a video game drive for “Get Well Gamers” and the American Lung Association. Fans who brought used or new video games to the gates would be given a free ticket to a future Storm game, or five tickets if fans brought in old consoles for donation as well.

All donated games and proceeds go to the “Get Well Gamers” association, which donates used games to sick children in order to help cheer them up and bring a smile to patients across the country. All games would be donated specifically to children’s wars of Local Area Hospitals in Riverside and San Diego Counties so that children could play games while recovering.

Fans looking to get involved with the Storm GeekEnd celebration still have a chance to attend Sunday’s game where the team goes medieval with an on field battle and actual renaissance faire before and after the game.

Be sure to check out StormBaseball.com and follow the team (@Storm_Baseball) on twitter for all the great promotions and events going up at The Diamond during the Storm’s 20th Anniversary celebration.