Join the Congregation!|Sunday, May 9, 2021
You are here: Home » Detroit Tigers

The Padres announced Saturday afternoon that the team has officially signed right-handed reliever Joaquin Benoit through 2015 with an option for 2016. With the announcement of Benoit’s signing, the team needed to make room on the team’s 40-man roster and as such pitcher Adys Portillo has been designated for assignment. Portillo has been a part […]Full Article 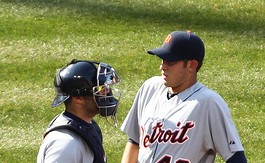 Jim Bowden has reported via twitter According to Tigers source the Padres have turned down Porcello for Street and Porcello for Gregorson but talks continue The Padres were first ...Full Article

The Tigers decided to lock down Anibal Sanchez for five-years, $80M.  Which once again opens the door to trading Rick Porcello.  According to Jim Bowden via Twitter, the Padres ...Full Article
The Friarhood Sponsors