Join the Congregation!|Monday, March 30, 2020
You are here: Home » Jeff Francoeur

The San Diego Padres official announced this morning that outfield prospect Rymer Liriano would be promoted to the big league club from Triple-A El Paso, and in a corresponding move, announced that veteran outfielder Jeff Francoeur would be designated for assignment. Liriano, touted as the Padres #6 prospect, has been a part of the Padres […]Full Article

The carousel that is the San Diego Padres 25-man roster continues at full speed into the end of July as the team has promoted outfielder Jeff Francoeur from Triple-A ...Full Article 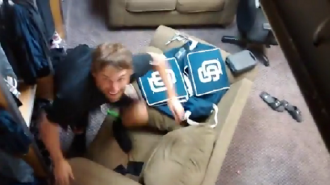 The AZL Padres, led by rehabbing San Diego Padres, were the only team on the farm to get a win tonight. The other 5 teams all lost by 3 ...Full Article

Max Fried made his 2014 debut with the AZL Padres tonight; he threw 1 inning, allowed 1 run, and struck out 1. The pitching was solid throughout the rest ...Full Article

Trea Turner helped continue the Emeralds win streak with his hot hitting as the Emeralds won 6-1. The Chihuahuas enjoyed an offensive explosion as they beat the Storm Chasers ...Full Article
1 2 3   Next »
The Friarhood Sponsors