Join the Congregation!|Thursday, April 15, 2021
You are here: Home » Kyle Blanks 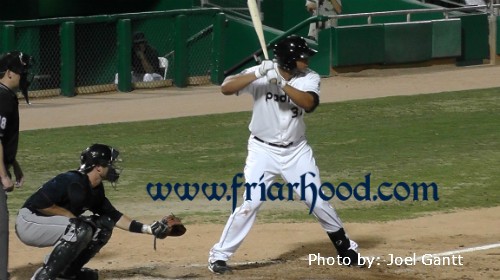 After days of speculation, 1B/OF Kyle Blanks was traded to the Oakland A’s today in exchange for OF Jake Goebbert and a PTBNL via Jerry Crasnick of ESPN.com. Goebbert, a 13th Round Draft Pick in the 2009 MLB draft by Houston, was hitting .257 with the Triple-A Sacramento River Cats with 25 RBI and 6 […]Full Article

The Chihuahuas, Missions, and Storm were all victorious today while the TinCaps were on the wrong end of a blowout. The Storm won a pitcher’s duel while the Missions ...Full Article

The Chihuahuas and Missions both got victories tonight due to strong offensive performances. The Chihuahuas were led by 3 extra base hits from Cody Decker while the Missions received ...Full Article

The TinCaps were the only team in the Padres organization that didn’t participate in a 1-run game today. The Chihuahuas and Missions found themselves on the wrong side of ...Full Article

The farm system went 2-2 tonight. The Storm’s offense was on fire as they blew out the 66ers. The Missions offense was silent yet again as San Antonio lost ...Full Article