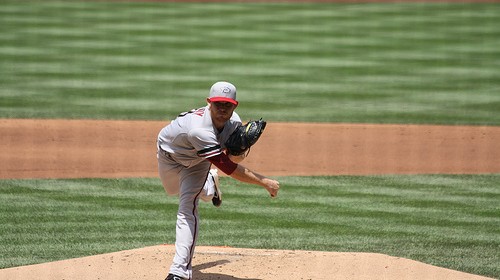 Via Corey Brock’s twitter account: The #Padres deal with the #Dbacks: Get RHP Ian Kennedy for LHP Joe Thatcher, RHP Matt Stites (Double-A) and a draft pick (comp B). Kennedy will be under the Padres control through 2015 with two years of arbitration remaining.  Kennedy’s struggles since 2011 are well documented, 18-20 4.47 ERA, 344 […]Full Article

Max Fried led the Fort Wayne pitching staff to a shutout of the Captains in 5-0 victory. Jeremy Baltz collected 2 hits, one being a 3-run home run, as ...Full Article

Every starting pitcher tonight tossed a quality start; for Walker Weickel and Donn Roach, it was their first quality start of the year. Both Weickel and Roach suffered similar ...Full Article

Despite a 4 RBI night from Yeison Asencio, the Storm lost 13-8 to the JetHawks due to sloppy defense. Donn Roach impressed again in his 2nd start of the ...Full Article

The Tucson Padres routed the Salt Lake Bees 14-3 in a 5 inning game. Jaff Decker went yard while almost every member of the lineup contributed. After being held ...Full Article
1 2   Next »
The Friarhood Sponsors