Join the Congregation!|Tuesday, June 22, 2021
You are here: Home » Farm System Info » The Conundrum that is Cody Decker

The Conundrum that is Cody Decker 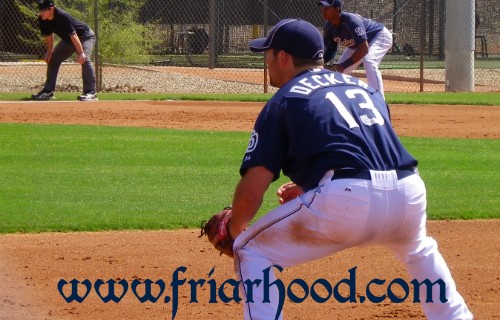 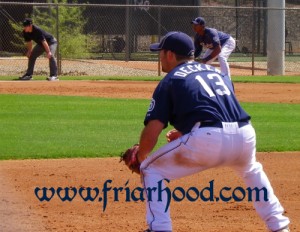 The most productive minor league bat still within the organization is keeping the benches in Tucson warm?  After being highly regarded last season, a combination of injuries and down seasons have sent the Padres farm system crashing back down to earth.  Although plenty of talent is at the single-A levels this season, most fans understand those prospects are typically two to three years away and plenty can happen between now and then.

In baseball, sometimes guys just get lost in the mix, and it appears at some point Cody Decker got lost in that mix.  Not a big surprise, he was drafted by a front office that has been replaced and then replaced again.  With Matt Clark ahead of him, Nate Freiman behind him, and playing on the same team with first round pick Allan Dykstra, Decker was the odd man out.  Somehow he was able to get at bats and produce at a very high level.

In 2011, General Manager Jed Hoyer traded Padres all-star first baseman Adrian Gonzalez to the Red Sox in a package for prospects, one of which was first baseman Anthony Rizzo.  The heir apparent Kyle Blanks suffered an elbow injury and underwent Tommy John surgery, so the Padres brought in free agent Brad Hawpe at the major league level and moved Matt Clark to the outfield at AAA to make room for Anthony Rizzo.   #RIZZOMANIA was born.

Allan Dykstra was traded to the Mets, and Decker assumed full-time responsibilities with the AA Missions, during which time he put up solid power numbers in a park that is very unfriendly to right-handed power hitters.  Although Decker did suffer a devastating ankle injury, he appeared in 49 games, hit 10 doubles, 13 home runs, 38 RBI, and 93 total bases.  Decker was also back in time to participate in the Texas League Championship series, where he was named the MVP.

2012 arrived and so did a (somewhat) new front office as Josh Byrnes was promoted to general manager.  He traded Padres ace Mat Latos for a package of prospects, including first baseman Yonder Alonso.  Keep in mind the Padres still had Anthony Rizzo, Kyle Blanks, Matt Clark, Cody Decker, and Nate Freiman.  The best depth of any position in the farm system was at first base, but Byrnes brought in Alonso anyway.

Alonso was instantly named the starting first baseman, Rizzo was traded to the Cubs, and Blanks broke camp with the Padres only to suffer a season-ending shoulder injury four games into the season.  Matt Clark moved back to first base at AAA, and Nate Freiman was now the starting first baseman at AA San Antonio.  Where is the Texas League Championship MVP, you might wonder?  On the bench.

Eventually, Decker was able to play himself back into the everyday lineup after a move to the outfield.  Decker finished that season with 26 doubles and 29 home runs, drove in 81 RBI, and collected 229 total bases in 2012 between San Antonio (did I mention this is a terrible park for right-handed hitters?) and Tucson.

So, that brings us to 2013. After a pedestrian rookie campaign, Alonso will return as the first baseman at the major league level.  Kyle Blanks crushes all spring, hitting .359/.442/.609 and becomes the starting first baseman for AAA Tucson.  Matt Clark reads the writing on the wall and leaves to play baseball in Japan.  Nate Frieman is claimed during the rule 5 draft by the Astros, who later place him on waivers where he starts the season with the Oakland A’s.  After a down season for offense in the Padres farm system, where does the most productive minor league bat start the season?  On the bench.

Yes, in this short start to the season the (Tucson) Padres have elected to bench Cody Decker two of the three games they have played in favor of 29-year old minor league free agent Travis Buck.  In 2012, the Tucson Padres elected to give at bats to the likes of Jeremy Hermida instead of younger players (not exactly what I would call long term vision).  Cody Decker, a catcher in college (and some games this spring), an outfielder for most of 2012, and an experienced first baseman with the Padres, cannot get a sniff of an everyday lineup.

In an organization that doesn’t have a lot of power bats, wouldn’t it make sense to have the best power hitter in the system playing every day?

Cody Decker will be a major league baseball player, just like most of his teammates from that great 2011 San Antonio team, but it’s likely he will see most of his success outside of a Padres uniform.  Like I said when I started this…sometimes guys get lost in the mix.