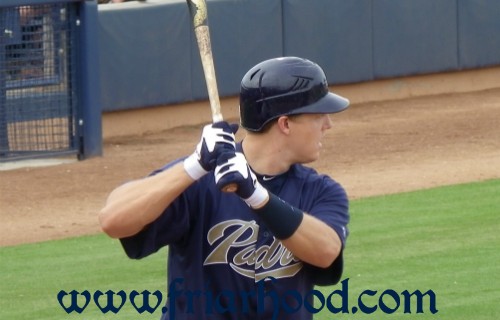 The everyday line-up is coming back almost exactly the way it was intended to be last year.  Questions, conjectures and all.  So, before we progress any further with our speculation of position players, here’s why you’ll see almost a carbon copy in the field in 2013:

In left field the decision was made, albeit and ill-advised one, to lock up Carlos Quentin.  He is your left fielder for at least 90 games in 2014.  I understand why Quentin received his contract but I don’t have to like it.  You won’t sign a free agent to play the position for less than half a year, to cover the time Quentin will be injured.

Back patrolling center will be Cameron Maybin.  He was injured all of 2013 and, given the fact he also got a guaranteed contract, he will get his job back.  I’d really like to see what the guy can do, but there’s no way of knowing that that is.

In right, you have the team MVP in 2013, who just got a contract of his own.  The thing about Will Venable is this, while he is a solid MLB-level player, he is not elite by any stretch.  Still, with his team-friendly contract, he is a guy you need if you’re a small-market team.

At third base, you have at least one more year of Chase Headley.  The catch is: he followed a phenomenal 2012 with a sub-par 2013.  You have no idea what you’re going to get out of him moving forward.  For that reason, the Padres have negotiating leverage in theory, but only in theory.  A team like the Yankees will be willing to give him whatever his agent asks for, even though the Padres will be justified to argue that he is not worth Evan Longoria-type money.

The lone All Star in 2013 will be back at shortstop.  Just like everyone else on this list, there are huge question marks surrounding whether he can repeat 2013 after getting busted for PED’s.  Even with those questions hanging in the air, a move here is doubtful, simply because of how good he was before he got the hammer from the MLB offices.

The best positional rookie since Khalil Greene will be the second baseman on opening day.  Since he’s under team control for years, Jedd Gyorko will be here a while.  However, anyone who saw his contact and on base numbers will attest that he could stand to improve in areas not relating to his power.  Even so, Jedd coming back at second base is about as close to a sure thing as exists in baseball.

Over at first you have the corner stone of the Mat Latos trade.  While I’m a huge fan of Yonder Alonso, some fans are grumbling about his lack of home run power.  This is a fair argument, but a foolish one.  Look at the doubles numbers and look at his ability to hit to all fields and you have a Mark Grace in the making.  I will take a triple slash of 290/370/480 out of my first baseman.  You’ve invested too much in him to move him.

At catcher, you have to assume either Nick Hundley or Yasmani Grandal will collect the majority of starts in 2014.  It is impossible to know which version of either one you’ll see: the 2012 Grandal that made fans cheer, or the 2013 one that made fans go “meh”.  The Hundley who can be the team’s best hitter for short stretches, or the guy who can go into a 4 for 38 slump.  Austin Hedges is not ready.  Hundley is guaranteed money.  You have to see what you have in Grandal.  Sounds like status quo to me.

In the end, even if you want to sign a free agent, where does he play?  Which one of these positions has a spot open?  The answer is: none of them.  That means the only avenue is a trade and I don’t know if these guys have much value on the open market.  So, you’re left with the same line-up in 2014.

The only other way to improve is on the mound.  I am left to assume the organization’s energies will focus there between now and February.