On December 31, 2011 the San Diego Padres made some waves by trading pitchers Simon Castro and Pedro Hernandez to the Chicago White Sox in exchange for Carlos Quentin. The outfielding slugger finished the 2011 season with a slash line of: .254/.340/.499, having played in only 118 games. He hit 24 home runs and knocked in 77 RBI. 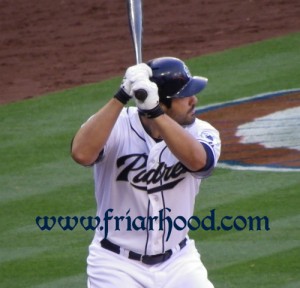 Carlos Quentin continues to struggle to stay on the field.

Castro was a highly-regarded starting pitching prospect who had just finished the season, splitting time between AA San Antonio and AAA Tucson. Castro’s overall line for that season was 7-8 with a 5.63 ERA in 115.0 innings. Hernandez was a fringe prospect, a lefty starter in the lower minors who finished 2011 having seen Hi-A Lake Elsinore, AA San Antonio, and AAA Tucson. The bulk of his season, though, was in Lake Elsinore. Overall, he finished with 116.0 innings and won 10 while losing 3, including a 3.49 ERA.

Much of the discussion centered on Quentin’s ability to stay on the field (still the issue) and Castro’s ceiling. To put it bluntly, Quentin hasn’t stayed on the field, and Castro hasn’t made the jump. All things considered, I liked the move. Castro had been declining, Hernandez didn’t seem to have much of a legitimate shot, and Quentin would bring some pop.

Now, about that on the field issue. For the 2012 season, Quentin started on the DL, having had knee surgery on March 8th. He returned in late May and only managed to play in 86 games that season, finishing with a slash line of .261/.374/.504. He clubbed 16 homers and drove in 46 RBIs. This season saw much the same, as Quentin missed significant time this spring with knee issues again. He started the season in the lineup, but the well-documented fight on April 11th resulted in an 8-game suspension. The team is playing its 18th game, and Quentin has 10 games under his belt.

It didn’t take long for the Padres to make up their minds about Quentin, however. After only two months on the field last season, the team rewarded him with a 3-year contract extension worth $27M on July 22, 2012. The question is, was or is this deal worth it?

For me to decide, I wanted to find a cohort group for Quentin and rank his performance against those peers. Turns out, the list is short. I wanted a position player with the same (relative) number of seasons as well as being paid a similar amount for this season. The list whittled down to: Boston’s Stephen Drew, Texas’ Nelson Cruz, Baltimore’s Adam Jones, Kansas City’s Alex Gordon, and Kansas City’s Billy Butler. Charts are pretty cool here:

A few things jump out. First, Quentin has the lowest WAR of the selected players. Granted, some of that could be the fact that he plays at a less than premium position. However, secondly, Quentin’s low WAR is more likely attributed to his fewer PAs. 2,800 PAs in 8 seasons is particularly low. Look at Billy Butler. He has seen one less year than Quentin yet owns almost 800 more PAs. Clearly, we’re not getting as much bang for our buck here.

Over his career, Quentin averages 89 games. That’s barely over half a season. It’s generally not good baseball business to see your highest paid player on the field about every other day. Some attribute Chase Headley‘s monster season to having some protection by Quentin. Those numbers do play out, but I’m wondering what Headley could have done with a full season of Quentin in the lineup. The most games Quentin has ever seen in a season is 131, back in 2010. The knee is clearly still an issue, now the suspension, and who knows what else is next. The only certainty in Quentin’s future is that he will miss time, and lots of it.

My issue is twofold: one, obviously, is the money. A team with San Diego’s resources can’t be wasting it on a player who’s there just over half the time, and I’m fully aware of what he’s capable of when he’s there. Two, I don’t like holding down a roster spot for that same reason. Granted, with Rymer Liriano down, there’s no hot prospect in the wings, but there are plenty of really interesting options: Daniel Robertson, Jaff Decker, Cody Decker (Those who know me are shocked to see Kyle Blanks missing here, but I heard he ran into the wall and is likely hurt, AGAIN…nothing official yet.).

So, in a nutshell, we risked very little to acquire Quentin’s services, so that was a good move. But, the extension has to raise some eyebrows. It hasn’t paid off yet, and the prospect of it paying off in the next year or two is slim and gets slimmer by the day. Or every other day.