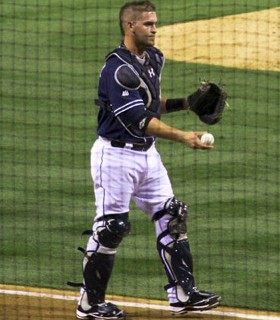 ESPN’s Jim Bowden, the former general manager of the Cincinnati Reds and Washington Nationals, recently wrote a two-part post listing each major league club’s “missing link.” Part I covered the National League, Part II the American and Bowden includes Padres-related material in each. First, he suggests the Friars “missing link” is a left-handed reliever and proposes they trade for Brett Cecil of the Toronto Blue Jays. Subsequently, when writing about the White Sox, he lists catcher-of-the-future as that team’s “missing link,” and recommends Chicago pursue Yasmani Grandal of the Padres to fill the need.

Here’s what Bowden has to say about dealing for Cecil:

“The Padres need a quality left-handed reliever for the back end of their bullpen to join Huston Street, Joaquin Benoit and Dale Thayer. The Padres have one of the strongest farm systems in baseball and certainly have enough to package together a deal to get Cecil from Toronto. The Padres have done an excellent job of balancing their lineup; now they need to do the same for their bullpen.”

A couple of issues/questions I have with this: One, I hesitate to say the Friars have done an “excellent job” in balancing the lineup. They acquired lefty-hitting OF Seth Smith and that’s it. Smith is a decent hitter and represents an upgrade over either Mark Kotsay or Alexi Amarista in that role but won’t strike fear in any opponent. Plus any hope the Padres have of fielding a solid lineup is still going to have to start with improvement from Chase Headley and healthy seasons from Carlos Quentin, Cameron Maybin and Yonder Alonso; all of which are far from sure things. Let’s just say I am far from sold that this group is going to constitute a quality offensive lineup.

Second, we have no idea if Toronto would seriously consider moving Cecil and if they did what they would want back in a trade. Bowman neglects to specifically talk about that aside from a generalization made about the quality of the Friars farm system. It’s easy to say Team A needs this and should go get Player X but without knowing the potential asking price that type of proposition comes across as a bit presumptuous.

Let’s move on to Bowman’s idea of Chicago getting Grandal; here’s what he wrote on the topic:

“White Sox GM Rick Hahn has done a wonderful job in landing long-term solutions in right field (Avisail Garcia), center field (Adam Eaton), first base (Jose Abreu) and third base (Matt Davidson) since July. He could finish the job now by landing a catcher of the future.

The Padres are blessed with the game’s best defensive catching prospect in Austin Hedges, which could make Grandal expendable in the right deal.”

I love, love, love the upside and potential of Austin Hedges. But I’m not sure how having him makes Grandal expendable right now. MLB.com lists his MLB ETA as 2015 and that’s probably meant to say he is on track to be called up at some point in 2015; not necessarily that he will be in position to take over the starting duties behind the plate. He did reach Double-A last season but had all of 67 AB’s and recorded an OPS of just .566. He’ll likely start this season with San Antonio and could make it to Triple-A sometime during the 2014 campaign. Trading Grandal now creates a vacancy this season that Hedges won’t be filling.

Sure, Nick Hundley is still around and so is Rene Rivera, who filled in while Grandal was out last year, but is either of those guys a starter on a playoff team? The Padres fancy themselves as a club that can compete if things go right (see, good health for a multitude of players and a productive season from Headley) so wouldn’t they want to field the best possible tandem behind the dish? To me that would be Grandal and Hundley, not Hundley and Rivera.

Additionally, coming off torn knee ligaments and a PED suspension, how can you describe Grandal’s market value as anything but low? Selling off an asset when their value is at its lowest point is not an example of good management. Under these conditions what could the Friars expect to get from Chicago? A B prospect? Um, no thank you, I’ll hang onto Grandal for now. It might make great sense from the Chicago perspective but dealing Grandal to the White Sox for what would probably be a ho-hum return is not a good idea for the Friars.

Now don’t get me wrong, unlike many I actually like Bowman and enjoy reading his posts. He has twice been in charge of a major league front office and that isn’t something that I or anyone reading this is ever going to be able to say. He knows baseball and is respected in major league circles far more than I am. That being said I still felt the need to question his logic here.