Join the Congregation!|Tuesday, April 20, 2021
You are here: Home » Farm System Info » Three for the Show: Catchers

Three for the Show: Catchers

This is the first in a 10-part series where I will identify the top three players at each position in the Padres’ minor league system. Up first: Catchers. 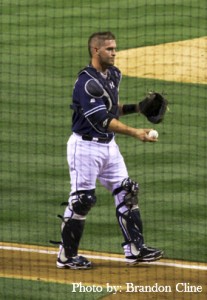 The Padres will miss Grandal’s bat to start the season.

The depth chart at catcher is certainly an area that presents an opportunity for improvement. The gap between the haves and the have nots for this position is fairly substantial. There are two to three guys who have the potential to make an impact at the major league level. The rest of the field is lagging behind. As I see it, the three players of note include: Yasmani Grandal, Jason Hagerty, and Austin Hedges.

First up, Yasmani Grandal. Granted, he’s not exactly a minor leaguer anymore, but he still has relatively little major league experience. As has been reported, Grandal has been banned 50 games for his use of testosterone. The real shame will be how this will delay his promising development. In his first 226 PA’s as a big leaguer, Grandal posted an impressive .376 wOBA. Factoring in all catchers with a minimum of 200 PA’s, and Grandal would be fourth on that list, with only Jonathan Lucroy, Carlos Ruiz, and Buster Posey possessing a higher wOBA. Yes, the sample size is small, but Grandal’s bat has promise. On the defensive side, Grandal only threw out 23% of baserunners. This contrasts sharply with his minor league average of 34%. Granted, runners steal off pitchers, but a CS% is one indicator, and the discrepancy with his minor league numbers is worth noting. Another is fielding percentage. Grandal’s was .988, good for 31st in the league, again with a minimum of 200 PA’s. The bat will play enough to cover the glove work. As it stands, Grandal deserves the shot to be the starting catcher.

Next on my list is Jason Hagerty. Hagerty has spent four minor league seasons working his way through the various MiLB stops in the Padres’ system. Last season, in AA San Antonio, Hagerty produced a .332 wOBA in 286 PA’s. For his career, Hagerty has thrown out only 28% of runners, and his .984 FLD% is nothing to write home about. However, his career minor league OPS is a solid .820. He hits better from the right (.311 AVG) than the left (.227 AVG). His bat does have some upside, but ultimately Hagerty may end up at first. While he may not be a frontline starter, his bat may get him into a major league uniform soon.

Austin Hedges seems to clearly have the most upside of the three, but he is still only 20 years old. I think some evaluators are overreacting to his offensive numbers a bit. My hunch is there’s a little social desirability going on. They like him so much behind the dish that they want the bat to be there as well. If he can continue a .354 wOBA like he did last season, he’s an All-Star in the making. The reality is, though, the bat was suspect from the beginning; otherwise, he’d have been a first round pick. Honestly, the defensive numbers aren’t stellar (.984 FLD%, 31% CS); however the reports are that he is major-league ready with the glove. With a thin system at catcher, it wouldn’t be surprising to see Hedges tested early, though the team doesn’t have a track record of rushing players.

With Grandal out and Hundley a big question mark, the catching position is in a precarious situation. The problem is, there isn’t a whole lot of impact help that’s ready to step up. This has to be an area of some concern to the organization as we move closer to pitchers and catchers reporting.