Three for the Show: Center Fielders 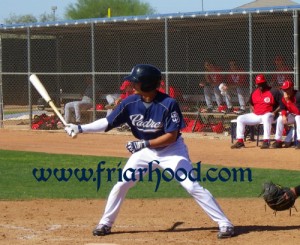 This is the seventh (getting there) in a ten-part series where I will identify the top three players at each position in the Padres’ minor league system. Up next: Center Field.

The first name that probably comes to the mind of most folks when it comes to pure center fielders is 21-year old Reymond Fuentes. The speedy outfielder has stolen 120 bases in the past three seasons. He’s also an above-average defender (5 errors last season) at a premium position. The one thing the organization would like to see is the stick to come around. Fuentes put up a promising season at Lake Elsinore as a 20 year old: .275/.342/.369, but last season, at a much tougher level, he struggled mightily: .218/.301/.302. It would be nice to see him rebound as he will likely repeat the level this year.

Rico Noel is another player to watch in center. Another good defender, Noel needs to take a big step forward, as he will be 24 this season and has yet to see time at AA. His size (5’9″ 175lbs) might prevent him from being a big league CF, but his speed might keep him there. In 134 games last season, Noel stole a jaw-dropping 90 bases. He strikes out a bit too much (151 K in 593 PA last season) for a speed guy, but the OBP was a respectable .357 in that same season. If he can cut down the K’s, he will have a shot a making big strides in the system this season. What will be interesting to see is if he will be on the same team as Fuentes. That will mean someone is the odd man out.

Speaking of time, I’m going to say the clock has pretty much run out on Donavan Tate. At 22, he’s no longer a spring chicken, and he really hasn’t blossomed into the player the Padres thought he could become. At his age, in the hitter-friendly Cal League, Tate only managed: .247/.391/.303. Granted, injuries and substance issues have clouded his development, but this really is the make or break season for him, and he’s going to have to put up big numbers just to get back on the radar.