Three for the Show: Left Fielders 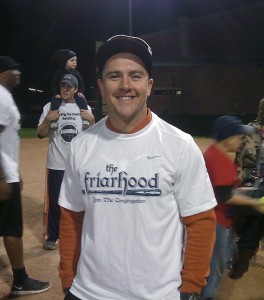 This is the sixth in a ten-part series where I will identify the top three players at each position in the Padres’ minor league system. Up next: Left Field.

I could easily have gone with simply “Corner Outfielders” for this piece, but I chose to treat left and right separately based on the slightly different skillset required at each position. Right field, especially at Petco, requires a generally more athletic player at the position. A guy who can take good angles, track balls well, and have a strong, reliable arm. Left seems to be the default spot for players to go when they’re blocked at another, especially on the infield. So, that being said, the guys described below led their respective teams at games played in LF.

Daniel Robertson is a player who has a good shot to make his MLB debut this season, and for good reason. Robertson can handle himself well on both sides of the field. He’s progressed fairly quickly through the minors, spending one year only at each stop along the way. Over those five seasons, he owns a career line of: .307/.383/.413. He’s stolen more than 20 bases in each season except for the last (AAA), where he stole 18. He’s banged out 24 triples and 122 doubles over his five minor league seasons. He’s actually a strong enough fielder to have spent most of his minor league time in center, but his size (5’8″) probably profiles best in left. He’s very much a grinder and a hustle guy, capable of making big plays both with the glove and the stick. He’s also the type of player that could quickly become a fan favorite because of his play and his personality off the field. Given Carlos Quentin‘s injury propensity, there’s a good chance Roberston is called up to fill a roster spot and could provide some spark to the lineup.

Dean Anna is another left fielder to watch, especially this coming season. Anna had his first full season at AA San Antonio last season, and he put up solid numbers, despite being a bit old (25) for the level. He finished: .271/.377/.393 while clubbing 10 bombs in the pitcher-friendly league. Those numbers very closely match his career line, and there’s a lot to like about how much he gets on base. As a Mission last season, he walked 66 times and, overall, he averages only 46 strike outs a season. Anna’s upside may be that of reserve outfielder or utility player, as he’s seen time at first, second, short, third, left, and right.

The last choice was a difficult one between similar players: Everett Williams and Luis Domoromo. The players are strikingly similar, but I’m going to put my money on Domoromo. His frame and his performance at low-A Ft. Wayne as a 19-year old is what makes the difference for me. In 486 PAs as a TinCap, Domoromo finished with a line of: .283/.335/.405, in a pitcher-friendly league. Williams spent two seasons at that level, accruing 470 at bats. His line totals: .246/.335/.368. The only hesitation I have for Domoromo comes from last season where he struggled in hi-A Lake Elsinore: 378 PAs: .219/.267/.302. Look for Domoromo to bounce back this season, where he will likely repeat as a member of the Storm. At 6’1″ 185lbs, he gets the slight edge from me over Williams (5’10” 200lbs), but honestly either could emerge as left fielders of the future.

The position in the system isn’t filled with star-studded prospects, but there are plenty of guys who could emerge to become solid, everyday players in left. The one player to watch is Robertson. A few things would have to go his way, but if that happens, he could bring a jolt to the offense and the team.