Three for the Show: Second Basemen 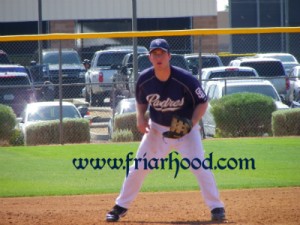 This is the third in a ten-part series (feeling more like Ken Burns now) where I will identify the top three players at each position in the Padres’ minor league system. Up next: Second Base.

Ahhhh. Finally some intrigue! San Diego has some interesting prospects at the second base position. Let’s start with the obvious: Jedd Gyorko.

Gyorko has a legitimate shot at being the Opening Day starter for the Padres at second base. However, the spot won’t be handed to him, as Alexi Amarista and Logan Forsythe have both made strong showings at the big league level. Everth Cabrera has also played there in his career. While Gyorko has spent most of his minor league innings at 3B, the middle infield is not foreign to him, as he played second in college and more recently in the minors. He played 30 AAA games at the two bag, committing one error for a .994 FLD%. Granted FLD% only tells part of the defensive story, but if Gyorko’s bat makes the transition, all he’ll have to do is make the routine plays. His slash line of .319/.385/.529 is impressive despite only 3 minor league seasons. He had a small hiccup in AA, so it will be interesting to see if that was coincidental. Playing in the arid PCL does wonders for the stick, while the TL can be a grind. His big league numbers will likely land in between, which will be just fine.

Jonathan Galvez is also a stick to keep your eye on. He has put together a respectable line in the minors in his five seasons: .281/.375/.435. His best season came as a 20 year old in hi-A Lake Elsinore. He clubbed 13 homers to go along with 36 doubles. Galvez does have a tendency to strike out. In 2010 at low-A Ft. Wayne, he struck out 121 times in 466 at bats. During the aforementioned Lake Elsinore season, Galvez whiffed a total of 123 times in 488 at bats. At 21, he was young for AA, so perhaps the strikeouts are an indicator of his immaturity as a hitter. What’s more concerning, though, is Glavez’s glove work. He made 20 errors in 2009, an alarming 43 in 2010, 24 more in 2011, and 11 last season. The bat will have to thrive if he has any hopes of staying up the middle.

Finally, there’s 2011 first rounder Cory Spangenberg who began torridly with a line of .384/.545/.535 at short season Eugene at the ripe old age of 20. He was then promoted to Ft. Wayne where he held his own: .286/.345/.365. Last season may have been a slight step back, as his slash took a bit of a dip: .271/.324/.352. All three stats in the slash were down from his previous season, and last season he was in a hitter-friendly league. Defensively, he’s made 23 errors in two seasons. This season will be an important one that will start to reveal if Spangenberg is in the mix for second baseman of the future.

Gyorko clearly has the inside edge to pin down the position for the foreseeable future, but he will have to earn his spot and show he can make those adjustments to be successful over the long haul.