Join the Congregation!|Friday, April 23, 2021
You are here: Home » Farm System Info » Three for the Show: Shortstops

Three for the Show: Shortstops 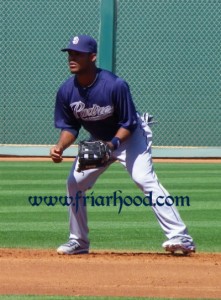 This is the fourth (not even halfway yet) in a ten-part series where I will identify the top three players at each position in the Padres’ minor league system. Up next: Shortstop.

Finding MLB potential at shortstop is not an easy proposition in the Padres’ minor league system. There are guys who can hit and guys who can pick it, but there’s no sure-fire player that looks to be able to do both in the big leagues. Of course, this is one of the most demanding positions on the diamond, so cultivating talent at this spot is no easy task. I always felt as though the team could have leveraged Anthony Rizzo for a middle infielder, someone like Junior Lake. So much for that. As it stands now, this position is fairly thin unless we see a player or two take a big step forward.

I’ll start with Jace Peterson. He was a first round pick (58th) in the 2011 draft, and he has the most upside to be the player at short for the long haul. He’s got size (6’0″ 200lbs) and handles himself well at the position. In two seasons, he’s committed 46 errors, 28 of them last season at low-A Ft. Wayne. Not a particularly alarming number but one you’d like to see him improve on this year. The bat, on the other hand, looks solid. At that pitcher-friendly league in Indiana, Peterson put up an OPS of .770. He burned on the bases with 9 triples and 54 of the stolen variety. There’s much to like here, he simply needs to continue to improve.

Jeudy Valdez is a tough one to peg. The glovework has been very solid throughout his career, and he committed a respectable 24 errors last season in 508 chances. The bat is the question mark. Looking at the numbers, it seems he enjoys the hitters’ parks and leagues. Ft. Wayne: .682 OPS. Lake Elsinore: .819 OPS. San Antonio: .637 OPS. Those peaks and valleys have me concerned as to how he’d perform at Petco, even with the modified fences. I imagine he’ll do well in Tucson this year, but I have doubts about the adjustment to the big leagues.

Beamer Weems is another candidate. He’s a player that has been widely considered to have the best defense in the organization. His .965 FLD% is tops on the team of the regulars at the position. If Weems can find a way to do a bit more with the stick, we’d have a guy ready to take over in the very near future. A career OPS of .703 points to some concerns. Especially since Weems finished with a slash of .241/.305/.351 in arid Tucson. Granted, he’s not that far removed from taking a 95 MPH fastball in the face, so this season will be interesting to see how he performs with a full season of ABs.

The top of the depth chart at this position isn’t the most stable, either, with Everth Cabrera, Alexi Amarista, and Logan Forsythe all having cracks at playing time there. If Cabrera can find a few more holes and raise the AVG and OBP, he’d have the position locked down. Trouble is, no one in the upper minors is ready to push him or force the organization’s hand here.