Three for the Show: Third Basemen

This is the fifth (took a week off…just to stretch it out) in a ten-part series where I will identify the top three players at each position in the Padres’ minor league system. Up next: Third Base.

If you want to crack the lineup as a third baseman in San Diego in the near future, you’re going to have to do it at a different position. Case in point? Jedd Gyorko. Granted, that’s until a decision is made on Chase Headley. My gut tells me the team will sign him to a big deal, leaving the 3Bs in the system to start honing their skills in LF (historically, the position of choice for converting hot corner players). 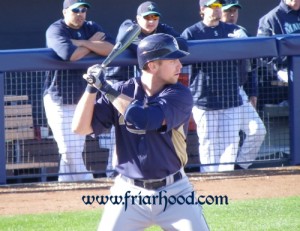 James Darnell will be an interesting puzzle piece this season.

James Darnell is a player who has fallen into injury obscurity. His name hasn’t come up much since the shoulder injury, sustained while playing in LF, not his natural position. I’ll save that rant for another day. In five minor league seasons, Darnell has an impressive line of: .299/.398/.508. He clubbed 63 homers over those seasons and walked 231 times. In 2011, in pitcher-friendly San Antonio, Darnell hit .310 with 23 HRs to go along with 29 2Bs. In 916 career chances at third, he’s committed 72 errors, resulting in a FLD% of .912. He should be ready for spring after recovering from shoulder surgery, so it will be interesting to see where the team slots him for this season.

Another player to make a note of is Fernando Perez. He’s green, only one Arizona League season in as an 18-year old, but he put up good numbers at Central Arizona JC. Perez had accumulated so many credits while in Mexico that he was declared a 5th year senior and was ineligible to play at Otay Ranch HS in Chula Vista. To solve the issue, he enrolled at Central Arizona and was immediately their 3-hole hitter. In 226 at bats, he finished: .341/.400/.580. Most impressive were the 11 triples to go along with 20 doubles and four homers. In the AZL, he held his own: .273/.298/.455. Originally a shortstop, he should be able to handle third, provided the bat adjusts.

Of course, as mentioned earlier, much of the debate at this position depends on the team’s approach with Headley. In all honesty, the new ownership would send a strong message by locking him up for the long term, which would make it tough for the guys mentioned above.