Time to Move on 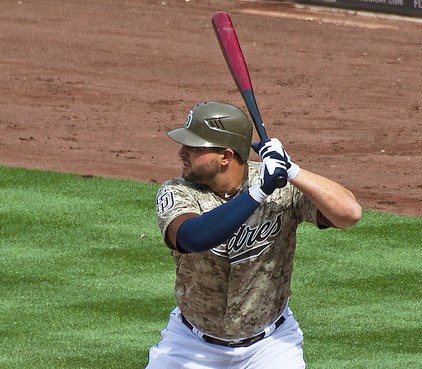 On Sunday, August 23rd and trailing 4-1 in the bottom of the third inning the Padres had a runner on base for their clean-up hitter, Justin Upton.  Upton worked the count to 2-2 and then reached base with a soft single to center field.  This put 2 runners on base with 2 out and the number 5 hitter coming to the plate as the tying run.

That number 5 hitter was Yonder Alonso.

To come back from being down 4 runs to a quality pitcher like Michael Wacha would be extremely difficult, obviously.  However, to that point in the game, the Padres were getting to Wacha, collecting 4 hits, a walk and 1 run through 2 and 2/3rds innings.  Momentum seemed to be going the Padres way and Wacha, while not on the ropes, was in danger of letting his early lead slip away.

I tweeted, at the time:

I decided to check a few #5 hitters from that Sunday:

Obviously, these players do not always bat fifth in the order but this at least gives us a flavor.

With the count 1-0 Alonso tapped the ball on home plate, where it bounced a few times.  The Cardinals’ catcher, Yadier Molina, adeptly jumped out of his crouch and grabbed the ball before it could spin foul.  Molina picked to the ball off the plate and tagged Alonso before he even made it out of the batters box.

Just so we’re clear: the ball traveled somewhere between 0 and 12 inches.

Obviously, little tappers in front of the mound happen to everyone.  That’s a given.  But to me this at bat was a microcosm of the problem of having a light-hitting first baseman, especially if he is batting fifth in your order.

When the Padres traded Mat Latos to Cincinnati and Anthony Rizzo to Chicago they, essentially, handed the first base job to a rookie.  That rookie had a pretty solid first season, setting the team record for doubles by a first year player on the way to a 1.1 WAR, 273/348/393 line to go with a 6th place finish in Rookie of the Year balloting.

Everything appeared to be trending up for Yonder Alonso.  Unfortunately, that season was the high-point in his career.  Alonso has failed to even come close to that level of production.  His WAR has declined every season until hitting 0.4 this year.

It’s not like he hasn’t been given the chance, either.  Despite injury issues (that we were told sapped his power) in 2 straight seasons, he has played the vast majority of the team’s games at first base this year.  We are told he is healthy, so really there is no excuses any longer.

At this point in his career Alonso is who he is, and I highly doubt that is going to change or that the power is going to come, eventually.  Let’s face facts: it is not.  Alonso, as likable a guy as he is, just can’t play corner infield or bat fifth in the big leagues.  Beyond the Box score suggests the number 5 hitter is nearly as important to a team as the clean-up hitter.

Whether it is internal candidates (Myers, Norris, Decker, Dickerson) or potential free agents (Chris Davis) it is time for the Padres to move on and find another solution.