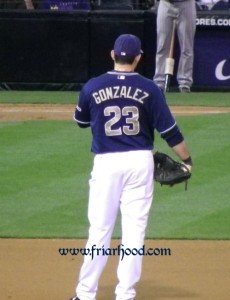 e’ll be looking at the top five players in Padre history at each position.  The first rule: we will only consider the players’ time with the Padres, so Mike Piazza doesn’t count because he was only here for 1 year.  I have set a completely arbitrary minimum of 200 games with the Padres.  The other rule: players will be considered for their primary position; so Gene Tenace is a catcher and not a first baseman.

First, we looked at catcher where Terry Kennedy barely beat out Benito Santiago for top spot.  Today, we move from behind the dish to behind the first base bag.

Yes he was past his prime.  Yes he is an icon with an in-division rival (he was not unique in this regard).  But there’s no arguing that the old man had 2 1/2 nice seasons with the Friars, hitting 52 home runs before moving on to Oakland.

I wish I could forget about Jack the Ripper.  He was surly, he was rude, he accused Tony Gwynn of being selfish for spending time watching video instead of going out with the boys.  But there’s no denying what he did in his 2 seasons here.  1989 was especially productive, hitting 26 home runs with 132 walks and finishing 12th in MVP voting.

Another player more recognized for his time with another team, Kruk had the best season of his career with San Diego in 1987 (20 HR, 91 RBI, .313 AVG) and that was one year after finishing 7th in Rookie of the Year voting.  A pure hitter but never an athlete by his own admission, Kruk became a fan favorite before being traded to the Phillies.

I love Wally.  I was a kid when he was a rookie with the Angels.  When the Padres got him I was ecstatic.  He was above solid defensively, had great bat control and hit a bounce-off-the-top-of-the-wall home run in the NLCS against Atlanta in 1998.  He is also the only Padre to play first base for 2 division championship teams.

The Garve has an eternal place in Padres lore.  The home run in the 1984 NLCS sent the Padres to game 5, and eventually the team’s first World Series.  He was more than productive, making 2 all-star teams with the Padres and garnering MVP votes in 1984.  He was also a team leader and helped young players learn how to win as part of a franchise that had not won anything in its first decade and a half of existence.  What’s more: Garvey was also a symbol that the Padres would begin to compete when he joined the team as a free agent from the Dodgers.  But, he probably doesn’t need his number retired.

The Crimedog belongs in the Hall of Fame.  I compare him to Hank Aaron, obviously not as prolific but McGriff was just consistent year after year.  He hit 30+ home runs in 8 straight seasons despite switching leagues.  In his 2+ years with the Padres he put together 2 of the best offensive seasons in team history.  In 1992, McGriff hit 35 home runs to lead the National League, drove in 104 with an insane .950 OPS and 5.2 WAR (while finishing 6th in the MVP race).  McGriff gets points for potency but loses them for duration, playing in only 388 games before being traded as part of the Fire Sale of ’93.

Quite the fun player to watch, Klesko had the ridiculous one-handed swing follow-through, ever-changing facial hair and connected on some of the hardest hit baseballs anyone has ever seen.  He hit one home run in 2001, against the Rockies, to dead center that never got above 10 feet off the ground.  The cannon-shot darn near put a hole in the concrete wall behind the centerfield fence as it traveled from home plate to home run in 1.2 seconds.  Klesko never could field, but he was fleet of foot, stealing 46 bases between 2000 and 2001.  But he makes the list for his bat, including his fantastic 2001 season (30 HR, 113 RBI) where he set the team record in RBI in a month.

38 years after he left the team, Colbert is still the franchise leader in home runs.  He is also an original Padre, selected by the team in the 1968 expansion draft.  What’s more impressive is the fact that Nate did everything he did without the smaller, inner wall at San Diego Stadium.  His home runs had to make onto the walkway on the plaza level of the stands.  How many home runs would he have if there was an inner wall?  200+ is my best guess.  So the next time people whine about Petco Park, tell them to go talk to Nate.  He still holds several National League records, including hitting 5 home runs and driving in 13 during a double header against Atlanta.  He was also one of the bright spots on the early Padres.  When they lost way more than they won, fans would still want to see big Nate take his hacks.

I tried every possible way to keep him out of the top spot.  I tried to rationalize that he was slow and struck out too much.  But in the end there is no denying that San Diego’s home-grown boy is the best first baseman in team history.  He was the best both defensively and offensively at the position. He is only 2 home runs away from the top spot in team history but hit for a better AVG, OBP and SLG than the guy in first place.  He made 4 all-star teams, collected MVP votes in his final 4 seasons here, including a 4th place finish in 2010.  He led the team to a division title and 2 more postseason near-misses.  I suppose all these facts made it so painful when he wanted to leave.