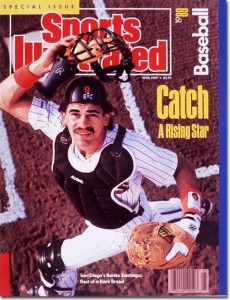 We’ll be looking at the top five players in Padre History at each position.  The first rule: we will only consider the players’ time with the Padres, so Mike Piazza doesn’t count because he was only here for 1 year.  The other rule: players will be considered for their primary position, so Gene Tenace is a catcher and not a first baseman.

Today, we’re looking behind the dish.

Acquired for the division title run in 1996, “Flash” put together 1 ½ solid seasons as a Padre before being traded to Tampa.

Perhaps the 2nd best pure hitter at the catcher position in Padres history (behind Piazza), though his defense was a little lacking; helped win a division title during 2 years here before signing for big money in Baltimore.

Known mainly as a defensive specialist, the Padres signed Carlos away from the Dodgers in ’97.  Provided more offense than expected while helping the team win the National League pennant in ’98, and was the guy hugging Trevor Hoffman after the final out of the 1998 NLCS.

Perhaps the 2nd best pure catcher in Padres history, was part of the trade that helped build the 1996 division title team (Ausmus, Andy Ashby and Doug Bochler for Greg Harris and Bruce Hurst).

Yes, 2012 was terrible (shaving about 20 points off his career slash line).  But there’s no denying what Nick has done in the 5 years since his call up.  Hundley’s bat got better each year until he broke out in 2011 and was the team’s best hitter in the early part of the season before getting hurt.  He also has the distinction of being one of only a handful of homegrown backstops in organizational history (Padres used a 2nd round draft pick in 2005).  Despite the regression in 2012, Hundley still ranks in the top 5 in Padres history at the position in games, home runs and RBI.

Kendall was THE backstop for the team in its infancy.  Posted a career year in 1973 and was voted team MVP (on a team with Nate Colbert and Randy Jones) with 10 HR and 59 RBI.  Led the NL in games played at catcher in 1976 and was the personal catcher for Jones in ’75 and ’76, the latter being the southpaw’s Cy Young season.  Kendall is remembered more for handling pitchers and defense and he did those things better than anyone in Padres history.  And you may have heard of his son, Jason.

Barely makes the list, not for his play, but because many fans remember him at first base, or even third, but the majority of his games were played at catcher.  Really was one of the first real free agents signed by the team as it started to climb out of obscurity.  Gene was the basic feast of famine hitter.  When he did swing, which wasn’t reckless by any means, he would swing out of his shoes and either strike out or hit it half-way to Alpine.  He saw his numbers drop when he moved from Oakland to San Diego because the inner home run wall at San Diego Stadium hadn’t been built yet.  His ability to draw walks also increased his value even with depressed power numbers.
#2

Signed as an amateur free agent and then absolutely nuts in his true rookie season, hitting 18 home runs with 79 RBI a .300 average, 34-game hitting streak and even stole 21 bases in 1987.  He was the runaway Rookie of the Year becoming the only Padre to ever win the award outright (Butch Metzger tied for the award in ’76).  Not only was he a dynamic hitter, but had a howitzer for an arm, making headlines and TV commercials by throwing base-stealers out from his knees.  (One TV ad showed Benny holding a baseball and, while interlaced with shots of him throwing people out, saying “Thou shall not steal, comprende?”)  He won 3 gold gloves with the Padres, received NL MVP votes in 1990.  It’s possible that if Benny played on better teams, he would have put up more numbers to pass the first guy on this list.

The replacement for Gene Tenace was really nothing to write home about during his first few seasons in St. Louis.  After arriving in San Diego and having an average year in 1981 Kenney starting hitting everything in sight, finishing in the top 15 in NL MVP voting the next 2 seasons.  He led the team to the pennant in 1984, playing in darn near every game.  In fact, he was an iron man of sorts from ’82 – ’84, missing an average of only 12 games a season over that stretch.  He would serve as a team leader for the next 2 seasons before leaving the Padres organization as the all-time leader as a catcher in: games played, hits, RBI, batting average and doubles.  Famous for being one of the only players to bat without batting gloves, Kennedy was simply the most productive catcher in team history and one only a few who could say they played in a World Series.