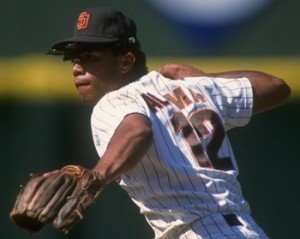 We’ll be looking at the top five players in Padre history at each position, today we examine second base.  The first rule: we will only consider the players’ time with the Padres, so Mike Piazza doesn’t count because he was only here for 1 year.  I have set a completely arbitrary minimum of 200 games with the Padres.  The other rule: players will be considered for their primary position; so Gene Tenace is a catcher and not a first baseman.

First, we looked at catcher where Terry Kennedy barely beat out Benito Santiago for top spot.  We then moved to first base, where Adrian Gonzalez unfortunately earned the top spot over Nate Colbert.  Today, we move around the diamond to second base.  This turned out to be a challenge as there is a log jam of players with similar numbers at the position.

Difficult to put him with the second basemen because he played the majority of his games at positions other than 2nd, but played more games at 2nd than any other single position.  Ready was steady in the field and better than you remember with the bat, even turning in a WAR of 5.7 in his best season of 1987 while collecting 12 HR and 57 RBI.

One of those guys who played longer and performed better than most fans acknowledge, Damian got his first real chance in the big leagues with the defending NL champs in 1999.  His first season was rough, but Jackson turned in a stellar 2000, establishing a career-best 2.6 WAR and stealing 40 bases.  Also still co-holds the team record for stolen bases in a game with 5, against Colorado.

Fans don’t give Bonilla the credit he deserves because of his battles with drug addiction.  Bonilla is still the only Padre to be voted team MVP in his rookie year, finishing 4th in NL Rookie of the Year voting.  Not the best glove ever but Bonilla could have accomplished much more if it wasn’t for a broken arm that led to an addiction to pain killers.

The 2nd baseman who took over for Bonilla, ironically, also had drug addiction problems.  But before Wiggins ended his baseball career, he was part of the Runnin’ Padres of the early 80’s; stealing  66 bases in ’83 and 70 in ’84, the top 2 seasons for stolen bases in team history.  Wiggins could also hit a little, batting .276 in ’83 and collecting 39 extra base hits in ’84 on his way to garnering votes for NL MVP.

When you look up “scrappy ball player” in the dictionary, there will be a picture of Tim Flannery with a dirty, brown and gold Padres uniform with a rip below the left knee.  Flan was one of the most beloved players in team history for his hustle, grit and longevity.  Fans got the chance to see Flan for 11 seasons.  He played pretty much every position in his time, but spent most of his innings at 2nd base.  I can’t quantify this, but Flannery probably had the most infield hits in Padre history because of his tendency to bust it down to first.  Had his best year in 1985, batting .281.

When the Padres won the NL pennant in 1998 fans credited guys like Greg Vaughn, Tony Gwynn and Ken Caminitti and rightfully so.  But one of the key components that made the Padres better in 1998 than the Division champs in 1996 was “Q”, and I’m not talking about the stadium.  Quilvio was such a dramatic improvement over Jody Reed offensively at 2nd base that he helped the Padres turn in 2 of the best offensive seasons in team history in ’97 and ’98.  Veras got on base at the top of the lineup to the tune of a .373 OBP in 1998, giving the guys behind him someone to drive home.

The only thing that keeps Bip out of the top spot on the list is the massive amount of time he spent at other positions.  It is difficult to name someone the best 2nd baseman ever when he was so often in places other than 2nd base.  But there is no doubting Roberts’ production in 2 tours of duty with the Friars.  At first, he was a sparkplug for the Padres as a Rule 5 draftee 1986.  Bip could do it all, he hit for average (.298 hitter as a Padre), he stole bases (4th in team history) and occasionally hit for power which led to fans assigning the nickname “Biceps Bip”.

If there ever was a player who could do it all for the Padres, it may have been Roberto Alomar.  If it is possible to display all 5 tools at second base, Alomar did it.  He was excellent with the glove, stole 90 bases in 3 seasons, hit for average, hit for more power than an average 2nd baseman.  Robbie finished 5th in Rookie of the Year voting in 1988, made the All-star game in 1990, created a huge fan following and almost led the Padres to a division title in 1989.  I didn’t agree with the trade that sent him to Toronto, and I still don’t agree with it now.

Fans grumbled when the team signed a 2nd baseman with limited range in his 30’s before the 2003 season.  Those fans quickly shut-up.  Loretta turned in 2 of the best seasons at second base in team history in ’03 and ’04, including his remarkable 208-hit season in the first year of Petco Park.  All Loretta did was hit, and hit to all fields, spraying the ball around and occasionally hitting for power.  His 2004 season was particularly amazing: 16 HR, 76 RBI, .335 AVG and leading the NL in sacrifice flies with 16 (this may sound silly to highlight this stat, but those are productive outs and how many times are Padre fans frustrated by batters failing to hit a sac fly?) on his way to making the All-star game, finishing 9th in MVP voting and being awarded the Silver Slugger award.