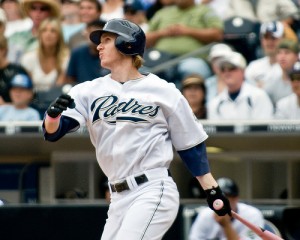 We’ll be looking at the top five players in Padre history at each position.  The first rule: we will only consider the players’ time with the Padres, so Mike Piazza doesn’t count because he was only here for 1 year.  I have set a completely arbitrary minimum of 200 games with the Padres.  The other rule: players will be considered for their primary position; so Gene Tenace is a catcher and not a first baseman.

First, we looked at catcher where Terry Kennedy barely beat out Benito Santiago for top spot.  We then moved to first base, where Adrian Gonzalez unfortunately earned the top spot over Nate Colbert.  Continuing around the diamond, we selected Mark Loretta and his offense over Roberto Alomar and his 5 tools.  Now, we continue to the left side of the diamond and shortstop.

Unless you’ve been a Padre fan for a long time, you’ve probably never heard of Hernandez.  The team was terrible in the 1970’s and Hernandez was unspectacular (career -0.5 WAR).  For what he was asked to do, play defense, Hernandez performed well.  When he got on base, he was a threat to steal (2nd on the Padres all-time list for SS).

Finally unseated Hernandez at the position, even though it took 3 years of toiling on the bench to make it happen.  Almon was pretty good when he finally got his chance to start in 1977, posting a 1.8 WAR.  Never got the chance to do it again for the Padres, because the following season we were introduced to a certain “Wizard”.

Surprising to find out that Cabrera has already climbed into the top 10 in franchise history at the position in almost every major offensive category.  You may also have forgotten that Cabrera finished 8th in Rookie of the Year voting in 2009. Easily the most dangerous Padre on the bases at the position, if Cabrera can just get on base at better than a 321 clip he will easily move up the list.

If it is surprising to see Cabrera on this list, it is even more surprising to see Vasquez.  Unspectacular with the glove, but way better than you are aware with the bat, Vazquez was thought to be the solution at shortstop.  That is, until a 2002 draftee got his chance at the position.  Had his best season as a pro with the Padres in 2002, posting a 1.4 WAR.

Gomez doesn’t get the run in Padres’ lore that he deserves.  First, his acquisition (along with John Flaherty) were major factors in the 1996 NL West title.  Second, he is one of only 2 Padre shortstops who can say they started for 2 division winners.  Third, he was excellent in the 1998 World Series, going 4 for 11.  His worth would be much higher if he was just a little better the glove.  But for 3 years, he provided offense from a position that the Padres have rarely gotten offense from.

Still part of one of the worst trades in Padre history, Tony did what he could to make us forget we lost Roberto Alomar.  After coming over with Fred McGriff, Fernandez was not quite the player he was with Toronto, but he was still very good with the bat and adequate with the glove.  He is also one of only 3 Padres to ever make the All-star team from the position.  He was potent for the 2 years here, but it was only 2 years.  If the Padres had him on the roster in the 80’s (while he was in his prime) this list would look different.

First thing’s first:  the Wizard is the greatest defensive shortstop in MLB history and that didn’t start in St. Louis, it started in San Diego.  Ozzie was electric in his 4 years here, causing a buzz at Jack Murphy Stadium year in and year out.  He was 2nd in Rookie in the Year voting in 1978 (losing to Bob Horner, which is a great trivia answer) and followed that with Gold Gloves in 1980 and ’81 as well as an All-star appearance in ’81.  Offensively, he wasn’t the greatest, but he was still pretty good.  He is still the Padres leader in steals at the position, 4th in hits and RBI.  Wish he wasn’t traded for another guy on this list, but the Padres thought they needed more offense.  What could have been, if he had stayed here?

The best Padre for power numbers at the position, Khalil was another fan favorite that got traded away, much to the disappointment of the fans.  Much like Ozzie Smith, Greene was drafted by the team, made his Major League debut with the team and finished 2nd in Rookie of the Year voting for the team (losing to Jason Bay, a former Padre).  What made Khalil different than Ozzie was his bat.  Khalil produced power numbers at a level that the Padres have never seen at shortstop.  He still holds the top 4 seasons in team history for HR’s by a shortstop, as well as the all-time franchise lead.  He wasn’t quite the defender the fans think, never posting a dWAR higher than 1.0 (many of those diving plays were created by lack of pure range).  His trade was part of a salary purge, which led to issues in St. Louis that ended his career.  Much like Ozzie, it is interesting to think what he could have been if he had stayed.

Outside of Tony Gwynn, no Padre was a fixture with the team like Tempy.  He is the top of the list for duration more so than potency.   Templeton was the player the Padres acquired for Ozzie Smith.  The idea was that Ozzie wasn’t producing with the bat the way the team wanted, so why not go get an offensive shortstop?  Gary Templeton fit the bill well indeed.  Templeton won the Silver Slugger in 1984 and made the All-star team in 1985.  Surprising to find out Templeton is 2nd on the franchise list for games played at any position.  But, at shortstop, he is either near the top or is the top of every significant category.  Templeton is not viewed in his proper place in team history for a couple reasons.  First, the fact we lost Ozzie Smith in his trade and second because he really got old by the end of his career.  But there’s no arguing:  427 RBI, 195 2B’s, 36 3B’s and 101 SB’s.