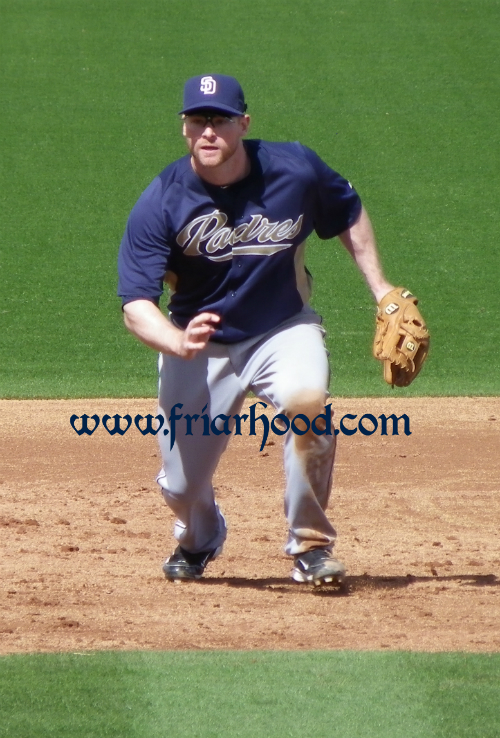 The hot corner has been a very diverse mix for the Friars.  From the incredibly good to whatever adjective you want to use for the opposite of good.  We continue to look at the top 5 players in Padres history at each position.  The first rule: we will only consider the players’ time with the Padres, so Mike Piazza doesn’t count because he was only here for 1 year.  I have set a completely arbitrary minimum of 200 games with the Padres.  The other rule: players will be considered for their primary position; so Gene Tenace is a catcher and not a first baseman.

First, we looked at catcher where Terry Kennedy barely beat out Benito Santiago for top spot.  We then moved to first base, where Adrian Gonzalez unfortunately earned the top spot over Nate Colbert.  Continuing around the diamond, we selected Mark Loretta and his offense over Roberto Alomar and his 5 tools.  Then, it was on to shortstop where Garry Templeton’s longevity beat out Khalil Greene’s power numbers.

Third base will be difficult.  Where do you want an admitted cheater who is an all-time fan favorite?  Also, how do you rank a bitter guy who got run out of town but who has sublime numbers?  Where do you put the current guy who’s really only had one stellar year?

It’s not easy, but here we go.

Not many early MLB Padres will make any list for the best of anything.  Spezio certainly wasn’t extraordinary with the first edition Padres.  But he did his job well enough to be in the top 10 in team history in every major offensive category for 3rd basemen.  1970 was his career year with 12 HR and a .285 BA.

I will eat a little crow here.  I once referred to Burroughs as an “epic failure”.  Upon looking closer at his numbers, that is not an accurate description.  He may have had almost no power at all (151 AB/HR-that-left-the-yard… because one was inside the park), but he was a scratch single machine for a while and has a career 5.3 WAR as a Padre.  Let’s also not forget he drove in the tying and winning runs in the first game ever at Petco Park to make a winner out of Eddie Oropesa (bonus points for knowing he was the winning pitcher that night).

Padres fans have to be happy to have flipped Josh Barfield for the Crushin’ Russian’ (who cares that he’s not actually Russian… cool handles rock!)  Kouz is a puzzling guy.  He was never really spectacular.  He was sometimes really bad (usually in April) but inevitably he would end each year with pretty solid numbers.  You may not believe he’s 4th in team history for HR’s by a third baseman.

Darn near broke in to the top 5 despite only being here for a fraction of his career.  Very few Padre third basemen have ever had a season like Sheff’s 1992, where he didn’t just flirt with the Triple Crown, he took it out for dinner and a movie (he only missed by 2 HR’s and 5 RBI).  Absolutely would have been higher on the list if it wasn’t for Tom Werner.

Players always, always, always get bonus points for leading the Padres to the Postseason and even more for leading them to the World Series.  We all know Nettles was old when he got to San Diego and his batting average usually sucked, but the guy was a leader for the 1984 NL Champions while hitting 51 HR in 3 short years.  Nettles also made the All-Star team in ’85, one of only 4 Padres to ever make it from the position.

Stop rolling your eyes.  I can almost hear you right now: “How does a utility man make this list?!”  Salazar wasn’t just “a” utility man, he was “the” utility man.  Despite playing the majority of his games at third, Salazar appeared pretty much everywhere else (including ‘87, where he appeared at every position except catcher and 2nd base… yes, I mean he pitched also).  What you may not know is just how good he was and how athletic he was.  He is still the franchise leader in steals and triples by a 3b… he is also 3rd in hits and 5th in RBI.

Before 2012, Headley would have missed the cut.  After 2012, one has to admit he has a realistic chance to end up on the top of the list if he stays in San Diego.  Chase was average, if not somewhat below that, for years.  First, the experiment in left field was a big-time issue.  He then went to his primary position and the results were kinda “meh” (shrugs shoulders).  Then came the golden year.  Fans probably don’t realize just how remarkable 2012 was.  Players don’t usually triple their career bests in offensive categories.  Not only can he hit, but Headley is a very good base runner, above average with the glove and repeatedly shows tremendous smarts (taking extra bases, faking out opposing runners, etc).  It will be interesting indeed to see just how much farther he can climb.

The big man is maybe the Padre I’d least like to fight.  There’s no doubting his numbers, he is first all-time in HR and RBI at the position, and nearly caught Nate Colbert for the all-time lead outright.  Nevin was also part of an incredibly fun tandem with Ryan Klesko (remember that one poster with the two guys, brandishing their bats almost in a threatening pose on the deck of a Navy ship with cannons behind them?  Awesome).  His 2001 was especially productive, with 41 HR and 126 RBI.  Then came the move to Petco Park and things changed.  Some argue it was the wide expanses of the home field that caused the dip in his production.   Others argue a more (ahem) clandestine reason.

First let’s get the elephant out of the room right now.  Cammy cheated.  He admitted he cheated and therefore we need to keep his production in a certain context.  However, the sheer size of the Caminiti legend is too hard to ignore.  Where does one even begin to discuss his entertaining 4 years here?  The throw across the diamond from his back-side against the Marlins?  His Snickers game in Mexico?  His 2-homer game in the NLDS against St. Louis?  The goatee?  The bats broken over his knee?  The wild crash at home plate that almost sent him skidding into the Padres dugout?  That video the Padres showed all the time of him without a shirt on in Hawaii that my wife seems to love so much?  Ken Caminiti was one of the very few players who transcended baseball.  In 1996, everyone in San Diego knew about him.  The incredibly stupid/catchy “Macarena” was re-recorded with Caminiti’s name.  The Padres sold cut-out paper goatees.  The guy was the Padres even more than Tony Gwyn for a short period of time.  I still have a shirt with cartoon Caminiti drawn to look like the Swingin’ Friar with the letters MVP.  Which, it should also be pointed out, is the only time in baseball history a Padre has been NL MVP.  And it was unanimous that year.  To sum up: 2 post-seasons, 1 NL pennant, 1 MVP, 3 Gold Gloves and the franchise leader for BA/OBP/SLG/OPS by a 3rd baseman.   And he may not have done anything that the second guy on the list didn’t.