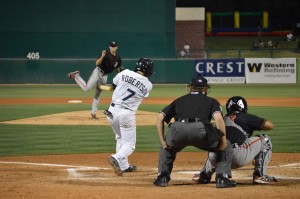 Outfielder Daniel Robertson was drafted by the San Diego Padres in the 33rd round of the 2008 MLB June Amateur Draft out of Oregon State University. He was selected 1005 overall that year.

He started his career for the Padres on it’s Class Short-Season A team the Eugene Emeralds in 2008. Robertson made it up to the Tucson Padres in 2012 and continues to produce for the team.

So far Robertson has played in 641 games, with 2,424 at bats and has accumulated 747 hits in his current minor league career. His career batting average is at .308.

Of those hits he has 135 doubles, 29 triples, 22 home runs and the rest of course being singles.

Robertson got to play third base for the first time in his professional career on Friday May 31 and he had some time to answer a few questions. 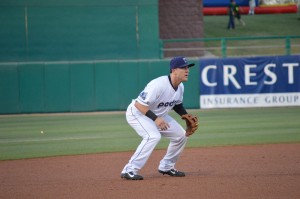 Q: How does it feel to play third base for the first time?

DR: “Its baseball , you know I played third base when I was in high school before. I played it for six or eight games, something like that, so its not new to me. Obviously the game is a little bit faster, but I’m excited, its a new experience, its time that you got look it in the face and say lets go.”

Q: So what do you think is going to be the hardest part for you?

DR: “I think its going to be more of like the ball thats not hit as hard as I think and reacting but its slower. I think that is going to be the toughest part, but I think everything in baseball is tough. You just got to look at it open minded and say hey coach needs me to play third base tonight, so I’m going to try and be an athlete and do the best that I can.”

Q: You’re recovering from your own injury, how’s that going?

DR: “I wouldn’t really call it an injury; a guy throwing the ball to third, caught me square on my ankle, my ankle swelled up. So it wasn’t like anything freaky, it was just right on the bone and now a few days of just icing, cold tub, getting it rubbed out, getting that blood flowing through. I feel pretty good now.

Q: What is your favorite position to play? What do you like about it?

DR: “Center, I like center, yeah center is my favorite, I mean if I could play second base, I’d play that too. You get the free range, you’re helping the guys in the corner, you’re a bigger impact on the guys in the corner and the guys up the middle when it comes to taking fly balls. Also you’re the last line of defense, as a center fielder you got more area to cover than the other two guys. Thats what I like to do, I like to cover ground. You’re the kid playing around in the park with your friends, you just want to run around. That kind of comes out when I’m out there.”

Q: Who was a player that you looked up to?

DR: “Oh Griffey(Jr.), no doubt. He was a big center fielder and yeah he hit for power, but just played the game with so much fun. He had a smile on his face all the time. He never let anything get to him, you never saw him mad, he came out and played the game like he loved it.”

Q: What do you think is the big difference between this season and last season?

Q: Is there a difference for you, between Terry Kennedy and Pat Murphy?

DR: “Nothing really, TK is a great guy, but I think certain people they have different personalities. TK’s personality demanded the same thing, he wanted us to go out there and do our best, but he’s not going to yell at you because he expected it. Murph is more, he’s got the boxer mentality, he’s going to let you know ‘hey man I think you need to do a little bit more of this and do a little bit more of that’ and TK is just, he’s a pro, he’s a pro’s pro. He expects it out of you he doesn’t feel he should have to tell you, he just expects it. Having him and Murph back to back seasons I feel blessed as a player to have them to just get better.”

Q: We saw Jesus Merchan pitch in relief, is that something you are interested in trying?

DR: “Nope, nope, my arm is strictly for throwing from the outfield or now third base.”

Q: What is your favorite thing to do in your off time?

DR: “I enjoy reading a lot, there’s a lot of things that I don’t know that I took for granted when I was in school and I enjoy reading, I enjoy just hanging out. I have a non-profit organization that I’m working on right now, that takes up a majority of my time. Thats pretty much all I do everyday.

Q: What is the non-profit organization you’re working on?

DR: “Its called ‘Gearing Up Athletes’ we just finished our logo and our website should probably launch by the end of the season.”

Q: What advice would you offer to the next set of baseball stars?

DR: “Play the game with passion, you’re not the first one to ever put on the uniform and the game is never going to stop just because of you. You have to have that mind frame that I’m blessed to play this game and I’m blessed to have an opportunity to be out here because at any moment it could be gone. If you’re going to sit around and look back on your career you want to know that you gave it everything you had, whether it was in high school, college, pro-ball, in the big leagues. You just want to know your effort was given everyday, so that way when you look yourself in the mirror you’re pleased with who you are looking at.”