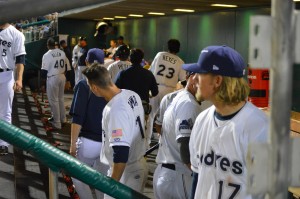 The Tucson Padres has started its 2013 season with a losing record of 3-7 through its first 10 games. The T-Pads have seen some changes starting this year, starting with a new manager. Pat Murphy has started out this new year with the T-Pads after spending the past two seasons managing the Eugene Emeralds, the San Diego Padres Class A Short Season affiliate.

The T-Pads lost its second game against the Grizzlies 11-6, after having played them in two games previously. Pitcher Nick Vincent(0-3) got the loss in the game on Sunday after coming into the game in the eighth inning. He threw on inning giving up three earned runs on three hits while striking out one and walking none.

The T-Pads did manage to push six runs across the plate. Shortstop Dean Anna went 3-5 hitting three singles and collecting and RBI. Center fielder Daniel Robertson was 2-4 on the evening, with two doubles and scoring two runs.

Second baseman Jonathan Galvez was 2-4 on Sunday hitting a double, a home run while collecting two RBIs and scoring one run. First baseman Brandon Allen also had a home run on the evening.

The T-Pads will finish off its four game series with the Grizzlies on Monday April 15 at Kino Stadium.

The T-Pads recorded its third win of the season when it played the Grizzlies on Saturday April 13, in a 5-3 victory.

Left fielder Travis Buck had a good night at the plate as he went 3-4 hitting two singles, a double and collecting four RBIs.

Robertson also produced at the plate on Saturday going 2-3 hitting a single, a triple and scoring two runs.

The T-Pads are hoping to continue with some momentum.

Tucson lost its first home game of the season 7-4 to the Grizzlies Friday April 12. The T-Pads were unable to get anything started and trailed the entire game against the Grizzlies.

Pitcher Sean O’Sullivan(0-1) got his first lost of the season after pitching five innings while giving up five earned runs on nine hits while striking out one and walking none. O’Sullivan did try to help his own cause as he went 1-1 at the plate, taking a walk that plated a run and hitting a double scoring two RBIs.

Galvez also had a good night at the plate as he went 3-3 hitting two singles, a double and scoring a run. Catcher Rene Rivera was 2-3 that evening with two singles and crossing the plate once.

The T-Pads will be looking for its first home win of the season as they take the field again tomorrow night.

The T-Pads played a double header on Thursday April 11 and took both losses against the Colorado Springs Sky Sox after the Tuesday and Wednesday games had been postponed due to weather conditions.

Tucson finished of the day losing 5-4 against the Sky Sox in the final game of the Thursday double header.

The T-Pads gave up three runs in the first inning and were unable to take the lead at all during the duration of the game.

Pitcher Tim Stauffer started the game for Tucson going three and two-thirds innings giving up four earned runs on 11 hits while striking out two and walking one, lucky for Stauffer, his start did not factor into the decision.

Only two players on the T-Pads were able to record hits against the Sky Sox in the first game of a double header. Left fielder/first baseman Kyle Blanks went 3-3 with two singles, a double and he crossed the plate once.

Rivera was the other hitter as he went 1-2 hitting a single and scoring a run.

The loss ultimately landed on the shoulders of Vincent(0-2) which is his second loss of the season so far. He threw one and a third inning giving up one earned run on one hit while striking out and walking none.

In the first game of the day Tucson lost by a score of 4-3 as they sent pitcher Jorge Reyes to the mound. Reyes only threw three innings giving up no earned runs on two hits, but he did not throw enough innings to factor into the decision.

Tucson got on the board first in the fourth inning on right fielder Jaff Decker’s single, plating two runs and then Galvez hit a sac fly to score the third run of the inning. The game was then in the hands of the bullpen.

Mikolas(0-1) ended up with the loss for the T-Pads after blowing the save opportunity, he only threw two-thirds of an inning giving up two earned runs on two hits while striking out one and walking none.

Tucson will head home for its home opener in which they will take on the Grizzlies in a four game series.

The T-Pads picked up its second win of the season as it defeated the Sky Sox 14-3 on Monday April 8, with the game being called early due to weather complication.

Sampson started the game and went two and a third innings giving up two earned runs on four hits while striking out three and walking two.

Reyes(1-0) would get the win marking his first win of the season as he threw two and two-thirds innings giving up one earned run on two hits striking out two and walking none.

The bats came alive for the the T-Pads Monday as they plated 14 runs in five innings of play. Tucson only managed one home run though, courtesy of Decker. He was 2-4 on the day with a single, two RBIs and scoring twice to go along with his long ball.

Tucson would like to keep this momentum with its bats rolling as it will be playing two games in Colorado in the next couple days.

The T-Pads got its first win of the season against the Bees beating them in a 9-1 contest on Sunday April 7.

Pitcher Thad Weber(1-0) got his first win of the season after going five innings giving up one earned run on five hits while striking out five and walking none.

There were only two batters in Tucson’s line-up that did not record a hit on Sunday. Robertson was 3-4 on the day hitting two singles, a double and scored two runs.

Buck also put together an impressive evening at the plate going 3-5 hitting two singles, a home run, collecting four RBIs and crossing the plate twice. Blanks also managed to go deep in the game as well.

Tucson would like to string together a win streak as that was one of its main problems last season.

The T-Pads lost its third game of the season in a 5-3 contest against the Bees on Saturday April 6. It is also the third game in a row.

Erlin started the game throwing three and a third innings giving up three earned runs on six hits while striking out three and walking three, he did not pitch enough innings to factor into the decision.

Tucson got on the board first with a run in the second inning and then added on two more in the third. The Bees tied the game up in the bottom of the the third and Tucson was unable to push anymore runs across.

Vincent(0-1) came into the game in the eighth inning and worked for one inning giving up one earned run on two hits while striking out two and walking one. This was Vincent’s first loss of the season.

The T-Pads only managed to get six hits in the nine innings of play, with no player having a multi-hit game and were just unable to string any hits together to get more than three runs across the plate.

Tucson is looking for its first win of the season and is hoping to break its current three game losing streak.

The T-Pads dropped a close loss on Friday April 5 in 2-1 contest against the Bees. O’Sullivan started the game for Tucson, throwing five innings giving up one earned run on two hits while striking out five and walking two. He did not factor into the decision.

Pitcher Fautino De Los Santos(0-1) took the loss on Friday after throwing a third of an inning giving up one earned run on two hits while striking out one and walking none.

The T-Pads were only able to rack up five hits in nine innings of play against the Bees, with no single player gathering more than one hit. Six of the Tucson batters were unable to get a single hit at all.

Tucson is now 0-2 on the season and will try to obtain its first win within the coming days.

The T-Pads kicked off the 2013 season on the road playing at Spring Mobile Ballpark in Salt Lake City on Thursday April 4. Opening Day did not treat the T-Pads well as they dropped the first game of the season 9-5 to the Bees.

Stauffer took the mound on Opening Day and threw three innings giving up four runs, three earned on seven hits while striking out one and walking one.

Pitcher Brad Boxberger(0-1) took the loss for Tucson on Thursday, also being his first loss as well after throwing one and two-thirds innings giving up two runs, one earned on one hit while striking out one and walking one.

The T-Pads were able to push five runs across the plate with a couple of players standing out. Shortstop Gregorio Petit was 3-4 hitting two singles, a home run, collecting one RBI and scoring twice.

The T-Pads will continue its road trip playing three more games against the Bees, then they will head to Colorado Springs for a three game series against the Sky Sox.

Tucson will have its home opener Friday April 12 against Fresno.