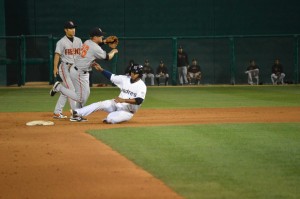 Sorry about the late posts, the final weeks of this semester has been a hectic one, as I assume most of you probably know, but here are the past couple weeks of posts and I promise to be on time from now on.

The Tucson Padres finished off its second week of the season going 5-2 and moved its season record to one game under .500 at 8-9.

The T-Pads started off the second week finishing off a four game series at home with a 12-11 loss to the Fresno Grizzlies on Monday April 15.

Tucson started the game off strong by putting up four runs in the first inning and tacking on three more runs in the bottom of the third, all the while holding the Grizzlies to zero runs.

The T-Pads starting pitcher Matt Jackson was solid through the first three innings of the game, but then struggled in the fourth, giving up three earned runs while only recording one out.

Pitcher Jorge Reyes then came into the game throwing two and two-thirds innings, not giving up a single hit while recording a strikeout and a walk.

After that is when things got out of control for theT-Pads, giving up nine runs in the final three innings.

The bats were alive and well for Tucson as they finished off the game with 15 hits. Center fielder Daniel Robertson was 3-4 on the evening, hitting two singles, a double, collecting two RBIs and scoring one run.

Left Fielder Travis Buck was 2-2 hitting a single, a double, collecting an RBI and scoring one run.

Tucson hopes to turn it around tomorrow as it continues its home stretch with a four game series against the Salt Lake City Bees.

On Tuesday April 16 the T-Pads took a 4-0 loss against the Bees, as the team wasn’t able to string anything together in the effort.

Tucson’s starting pitcher Tim Stauffer(0-1) put together a great outing as he threw six innings giving up only one earned run on six hits, while striking out five and walking four.

It was enough to give Stauffer the loss, his first of the season.

The T-Pads only managed five hits agaianst the Bees on Tuesday. Designated hitter Jonathan Galvez had the best night at the plate going 2-4 hitting two singles.

Tucson hopes to have better luck against the Bees tomorrow.

The T-Pads pulled out its first win of the week on Wednesday April 17 in a 10-7 contest against the Bees.

The team got the bats going in this game early as it scored nine runs in the first four innings of the game.

Pitcher Sean O’Sullivan started the night off for Tucson throwing four and two-thirds innings, giving up four earned runs on seven hits while striking out four and walking three. He ended up with a no decision.

Relief pitcher Brandon Kloess(1-0) ended up recording the win, his first of the season, after throwing one and a third innings giving up zero runs on three hits, while striking out and walking none.

Relief pitcher Brad Boxberger recorded his first save of the season after coming into the game in the eighth inning, throwing one and two-thirds, giving up only two hits while striking out five.

The bats came to life for the T-Pads on Wednesday, with the team getting 14 hits in the game. Third baseman Jesus Merchan had the best night going 3-4 hitting two doubles, a triple, collecting two RBIs and crossing the plate twice.

Right fielder Jaff Decker was 2-4 on the evening going yard once, as well as hitting a double, collecting three RBIs and scoring twice.

The T-Pads also had four other hitters go 2-4 on Wednesday.

Tucson is hoping to continue to add more into the win column as it moves forward in this home stand.

On Thursday April 18 Tucson got another win against the Bees in a close 3-2 contest.

Starting pitcher Thad Weber(2-0) had a terrific outing, recording his second win of the season after throwing six shutout innings, giving up only five hits while striking out five and only walking one batter.

Relief pitcher Miles Mikolas got his second save of the season throwing the ninth inning, giving up just one hit and striking out one.

The T-Pads finished off the evening with six hits, left fielder Brandon Allen was 2-4 in the game hitting a double, a home run, collecting two RBIs and scoring once.

The other four hits for Tucson came from four different individuals.

The team is hoping to extend its win streak to three games in the final game of the series against the Bees.

The T-Pads had a dominant performance against the Bees on Friday April 19, winning 12-4.

Starting pitcher Robbie Erlin(2-0) got his second win of the season after throwing five innings, giving up two earned runs on five hits while striking out one and walking three.

Tucson finished off the game with nine hits. Robertson was 2-3 hitting a single, a triple, took two walks and crossed the place four times.

Galvez was 2-4 hitting a single, a double, collected three RBIs and scored once. Buck got his second home run of the season on Friday.

The T-Pads hope to extend its win streak to four games as it heads to Fresno to play a four game series against the Grizzlies.

Tucson put another win in the record books as it defeated the Grizzlies 5-4 on Saturday April 20. The team jumped off to an early lead scoring two runs in the first, tacking two more on in the fourth and adding one in seventh, never losing the lead in the game.

Reyes(2-0) got his second win of the season after throwing one and two-thirds innings giving up one run on three hits while striking out two and walking none.

Boxberger got his second save of the season after throwing the ninth inning only giving up two hits while striking out one and walking one batter.

Robertson had another good night at the plate going 2-4 hitting a single, a double and scoring once. Catcher Jason Hagerty also went 2-4 hitting two singles and collecting one RBI.

Tucson hopes to extend its win streak to five games as it takes on Fresno again tomorrow.

The T-Pads continued its win streak on Sunday April 21 as it beat the Grizzlies in another 5-4 contest.

Stauffer got his first win of the season after throwing five innings giving up two runs on six hits while striking out four and only walking one.

Boxberger recorded his second save in two days bringing his total three on the season after throwing the ninth inning giving up two earned runs on two hits while striking out three and walking one batter.

The only other hitter to get more than one hit in the game for the T-Pads was Galvez who was 2-5 hitting a double, a home run, collecting two RBIs and scoring twice.

The T-Pads will hope to continue extending its win streak as it heads into its next week of play as it will finish off the four game series with the Grizzlies, then the team will comeback home to play a four game series against the Colorado Springs Sky Sox.

The finish this week with a season record of 8-9, hoping to get above .500 in the coming week.