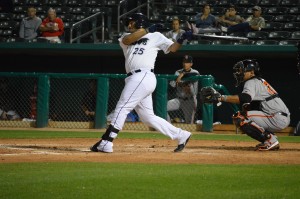 Okay now back to the delayed weekly post, I promise I will be on time from now on with the posts.

Tucson started off the week with a record of 8-9 on the season and has a current win streak of five games.

The team extended that win streak to six games after defeating the Fresno Grizzlies 8-6 on Monday April 22.

Starting pitcher Sean O’Sullivan(1-1) got his first win of the season after throwing seven innings giving up three earned runs on eight hits while striking out four and walking none.

It was the longest start of the season for O’Sullivan. He also helped his own cause by going 2-3, hitting a single, a grand slam, collecting four RBIs and scoring once.

Relief pitcher Miles Mikolas recorded his third save of the season after throwing the last two-thirds of the ninth inning giving up no hits while striking out and walking none.

Tucson got 11 hits in the game on Monday with first baseman Cody Decker leading the way with three hits on the day. He was 3-5 hitting a single, a double, a home run, collecting four RBIs and scoring once.

Left fielder Travis Buck also had a good game at the plate going 2-5 hitting two singles and crossing the plate once.

The T-Pads hopes to extend its win streak to seven games as it takes on the Grizzlies in the final game of the four game series tomorrow.

Tucson’s winning streak was brought to end at six games as the Grizzlies defeated Tucson 4-2 on Tuesday April 23.

Pitcher Eddie Bonine(0-1) got his first lost of the season after throwing three innings against the Grizzlies on Tuesday.

Bonine gave up two earned runs on six hits while striking out one and walking one in the game.

The T-Pads were only able to get six hits on Tuesday with second baseman Jonathan Galvez getting three of those hits. He was 3-4 hitting two singles, a double and collected two RBIs.

Tucson gets its first day off of the season tomorrow Wednesday April 24, not counting the two days earlier this month due to weather.

The T-Pads came back home to Kino Stadium on Thursday April 25 to take on the Colorado Springs Sky Sox in a four game series.

Tucson was unable to come away with the win on Thursday as it lost 13-5 against the Sky Sox.

Starting Pitcher Keyvius Sampson(0-1) recorded his first loss of the season after throwing three innings giving up four runs, three earned on four hits while striking out none and walking two.

Of the 13 runs given up by the T-Pads on Thursday only one of them wasn’t earned.

Tucson only got seven hits on Thursday with center fielder Daniel Robertson getting three of those hits. He was 3-5 hitting two singles, a home run, collecting three RBIs and crossing the plate once.

No one else on the team recorded multiple hits on Thursday. Tucson hopes to reverse the trend tomorrow against the Sky Sox.

The T-Pads were shutout 3-0 on Friday April 26 against the Sky Sox.

Tucson was on the losing side despite out hitting the Sky Sox, getting seven hits to the Sky Sox’s six.

It was starting pitcher Tim Stauffer’s(1-2) second loss on the season after throwing six innings allowing two earned runs on five hits while striking out four and walking two.

Catcher Rene Rivera had three of the seven hits for the T-Pads on Friday going 3-4 with three singles. Once again no other hitter on the team managed to have a multiple hits in the game.

Tucson is hoping to break away from the two game losing streak against the Sky Sox as it takes them on in the third game of a four game series tomorrow.

The T-Pads had the bats alive and well as they beat the Sky Sox 7-3 on Saturday April 27.

Robertson had a hot bat on Saturday going 3-4 hitting two singles, a double, collecting an RBI and scoring twice.

Shortstop Gregorio Petit also had a good night at the plate going 3-4 hitting two singles, a double and scoring once.

O’Sullivan started the game, but got a no decision after throwing five and one-third innings giving up three runs, two earned on three hits while striking out a season high seven batters and walking only one.

Pitcher Colt Hynes(1-0) got the win, his first of the season after throwing two-thirds of an inning giving up no hits while striking out two and walking none.

Tucson is hoping to even the series at two games a piece as it takes on the Sky Sox in the fourth and final game of the series tomorrow.

The T-Pads split the four game series with Colorado springs and were able to put up another seven runs in its 7-4 victory over the Sky Sox on Sunday April 28.

Starting pitcher Thad Weber(3-0) got his third win of the season after throwing six innings giving up four earned runs on six hits while striking out three and walking one.

Mikolas also managed to record his fourth save of the season by taking care of the eighth and ninth giving up only one hit while striking out two and walking one.

Petit had a tremendous game at the plate going 4-4 hitting two singles, a double, a home run, collecting two RBIs and crossing the plate twice.

First baseman Brandon Allen had a good night at the plate as well going 2-4 hitting a double, a home run, collecting one RBI and scoring twice.

Don’t forget to post a comment with your vote for who should be my first player profile of the season.