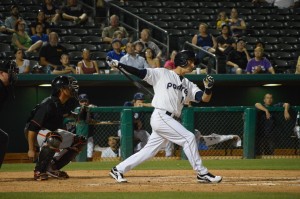 After the month of May Tucson is two games behind the division leaders, the Sacramento River Cats.

There were several contributors to the team’s efforts, however the next two players respectively had the best performance for the month of May for the T-Pads.

The hitter for the month of May is infielder Dean Anna.

Anna attended Ball State University and was drafted in the 26th round of the 2008 MLB June Amateur Draft by the San Diego Padres.

He was picked 795th overall.

In the month of May for the T-Pads Anna had a batting average of .336 which was only second to teammate Rene Rivera who batted .350 for the month.

However, Anna had an an on base percentage of .413 which led the team for the month of May.

Anna had a total of 36 hits for the month with 24 of those hits being singles, nine going for doubles and three of them going deep.

He also scored 20 times and recorded 16 RBIs, leading the team in both categories for the month of May.

With that type of performance its easy to understand why the team finished off May with the record they did.

However, that is only half of the story so far, now we need to flip to the other side and discuss the pitcher for the month of May.

Sean O’Sullivan is the pitcher of the month.

O’Sullivan was drafted in the third round of the 2005 MLB June Amateur Draft by the Los Angeles Angels of Anaheim.

He pitched in six games in May, with all six of them being games he started.

Over that span he gave up 17 runs, only 12 of which were earned on 38 hits while striking out 35 batters and walking 11.

O’Sullivan led the team in innings pitched and strike outs for the month.

He also only gave up two long balls in that time span.

For the month the opposing team’s batting average was .271 against O’Sullivan.

Keeping runners off the base path goes a long way to winning.

If Tucson is able to maintain this nice mix of offense and productive pitching performances than team may be able to slide into first place.

Time to keep the momentum going.