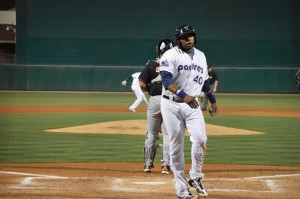 The Tucson Padres finished off its 10th week of play going 2-5, taking one game from each series so far. The team currently still sits tied for second place in the division with the Las Vegas 51s. Both teams are four games back of the leading Sacramento River Cats.

The T-Pads lost its first game of the week 10-1 to the Fresno Grizzlies on Monday June 10.

The Grizzlies seemed to have Tucson’s pitching staffs number as it scored in every inning but two. Tucson’s starter Brandon Kloess(2-1) managed to get through four innings giving up seven runs, six earned on 10 hits while striking out six batters and only walking one.

The game marked Kloess’ first loss of the season.

Coach Pat Murphy once again used infielder Jesus Merchan to pitch for the final out in the eighth inning to keep from having to use another reliever.

Pitching wasn’t alone in its struggles on Monday as the T-Pads bats were kept quiet, only collecting five hits as a team.

J. Decker went 2-3 hitting a single, a double and collected Tucson’s only RBI of the game. The solo RBI was Decker’s 20 for the year.

The T-Pads were 1-6 with runners in scoring position and left eight runners stranded on the base paths in the loss to Fresno.

Tucson will look to have better luck in the second game of the series against the Grizzlies on Tuesday.

The T-Pads grabbed another win for the column as it defeated the Grizzlies 7-2 on Tuesday June 11.

Pitcher Robbie Erlin(5-1) got his fifth win of the season after throwing five innings, giving up two runs, only one earned on five hits while striking out six batters and only walking one.

In his outing Erlin faced 22 batters and threw a total of 91 pitches with 53 of them being strikes.

Tucson more than doubled its hit total from the previous night, collecting 11 hits against Fresno on Tuesday.

J. Decker had another multi-hit game going 3-4 hitting three singles and scoring once.

First baseman Cody Decker also got in on the action going 2-5 hitting a single, a double, collected an RBI and crossed the plate once. The RBI marked his 25 of the year.

The other player that had a multi-hit game was second baseman Jonathan Galvez who went 2-4 hitting two singles, collected an RBI and crossed the plate once. The RBI was his 31 of the year.

Tucson will try and keep the ball rolling against the Grizzlies as the teams will meet for the third game of the series on Wednesday.

Tucson took a heartbreaking 5-4 loss in 12 innings to Fresno on Wednesday June 12.

Tucson fell behind early on, but mounted a comeback and tied the game in the seventh inning. The game was held in a stalemate until the bottom of the 12th with Fresno getting a bases loaded a walk-off single for the victory.

Pitcher Anthony Bass got the start and threw five innings giving up four earned runs on 11 hits while striking out three batters and walking none.

However, in the end it was pitcher Jorge Reyes(4-2) who recorded the loss after throwing the 11th and 12th inning, giving up one earned run on three hits while striking out three batters and walking four.

Two of the walks were intentional in the bottom of the 12th to have a force play at the plate with the possibility of a double-play.

The loss was Reyes’ second of the year.

Tucson collected nine hits as a team, with only two players having a multi-hit game.

The other T-Pad player with a multi-hit game was outfielder Mike Wilson who went 2-5 hitting two singles and collecting one RBI, his seventh of the year.

C. Decker hit a solo shot over the left field wall in Chukchansi Park in the top of the second inning. It is his sixth homer of the season.

Tucson had numerous opportunities to claim victory as the team was 1-15 with runners in scoring position on Wednesday and the team stranded 13 runners on the bases.

Getting hits with runners in scoring position has been a struggle for the T-Pads this season and just need to bear down in those situations and put the ball in play.

Tucson will try and even the series on Thursday before coming home to Kino Stadium to have a four game series against the Reno Aces.

The T-Pads was defeated 2-0 after giving up some late innings runs to Fresno on Thursday June 13.

Pitcher Burch Smith(2-1) started for Tucson and threw six innings giving up one earned run on six hits while striking out seven batters and only walking two.

It was Burch’s first loss as a T-Pad since he came to the team on May 25 from San Diego.

Tucson wasn’t able to get it’s bats going on Thursday as the team only managed to get five hits, with three of them coming from second baseman Dean Anna.

Tucson will look to comeback from the tough loss as the team will be coming home to try and turn things around against the Aces on Friday.

After falling behind the first inning Tucson rallied back to take the lead and hold onto it, in it’s 6-5 victory over Reno on Friday June 14.

The T-Pads got a strong outing out of pitcher Sean O’Sullivan(6-3) who threw eight innings giving up three earned runs on 12 hits while striking out eight batters and only walking one.

It was O’Sullivan’s sixth win of the season as he totaled a 102 pitches with 65 of them being strikes.

Pitcher Miles Mikolas recorded the save, his 11 of the season, after throwing the ninth inning, giving up two runs, neither of them earned on one hit while striking out no batters and walking one.

The bats were alive and well for Tucson on Friday as the team collected 13 hits, with five of its batters having multiple hits.

C. Decker once again had a good night at the plate as he went 2-4 hitting a single, a home run, collecting two RBIs and crossing the plate twice. The home run was his seventh of the season.

Outfielder Kalian Sams was also 2-4 hitting a single, a double and crossed the plate once.

Petit also went 2-4 hitting a single, a double and collecting two RBIs. He now has 31 RBIs for the year.

The other two T-Pad players with multi-hit games were Anna and outfielder Daniel Robertson, both going 2-4 hitting a single, a double, collecting and RBI and scoring once.

Tucson will look to continue with the momentum as it will take on the Aces in the second game of the series on Saturday.

The T-Pads were held to six hits in its 5-0 loss against Reno on Saturday June 15. 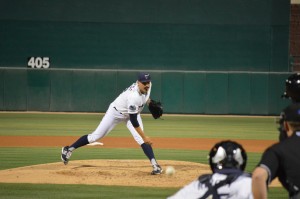 Kloess(2-2) got his second loss for the month and the season after throwing five and two-thirds innings on Saturday. He gave up three runs, two earned on six hits while striking out eight batters and walking only one.

Of the six hits for the team, catcher Rene Rivera managed three of them. He was 3-4 hitting three singles.

Tucson didn’t get many chances to score as the team had just two times when it had runners in scoring position and it didn’t capitalize on either chance.

The T-Pads will take on the Aces in the third game of the series in hopes of turning its week around.

Tucson was unable to contain the Aces in the 18-7 loss on Sunday June 16.

Reno took the lead in the first inning, scoring nine runs and never looking back. The two teams combined for a total of 32 hits and had only two innings that a run didn’t cross the plate for either team.

Erlin(5-2) was the starting pitcher for Tucson on Sunday. He only managed to pitch two innings before being lifted.

In his two innings of work Erlin gave up 11 earned runs on 11 hits while only managing to strike out two batters and walking two also.

The T-Pads managed 12 hits in the game and had four different players with multiple hits.

Allen was 3-5 on the evening hitting two singles, a home run, collected two RBIs and crossed the plate twice.

Allen’s seventh inning home run to right was his seventh homer of the year.

C. Decker also had a good night at the plate going 2-3 hitting a single, a home run, collected two RBIs and scored once. His home run in the ninth inning to left marked his eighth of the season.

The fourth player with a multi-hit game was Merchan who was 2-4 hitting two singles and collected an RBI. He also came in and pitched the ninth inning giving up one earned run on two hits and walked one batter.

Tucson will try and even the series at two games a piece as it will play the Aces in the final game of this four game series.

It will continue the home stand as the T-Pads will welcome the Las Vegas 51s to town for a four game series before heading to Aces Ballpark to take Reno on in another four game series.

If Tucson can out play the 51s it will take sole possession of second place in the division.