The Tucson Padres finished off its 12th week of play going 5-2 on the week, winning two games against the Reno Aces and taking three of five from the Colorado Springs Sky Sox to finish off the month of June.

Tucson finished off the month of June with a season record of 45-39, which put them in first place of the division. The T-Pads are half game up on both the Las Vegas 51s and the Sacramento River Cats, who had led the division up until this point.

The T-Pads are amidst a 12 game road trip that has started out in Reno.

Tucson pulled at late inning 4-2 victory over the Aces on Monday June 24.

First baseman Cody Decker was the big at bat for the T-Pads on Monday as he hit a three run shot over the left field wall in the top of the sixth inning.

The home run was C. Decker’s 10th of the season.

Pitcher Sean O’Sullivan(7-4) recorded the win, his seventh of the season after throwing seven and two-thirds innings, giving up two earned runs on six hits while striking out seven batters and only walking one.

O’Sullivan faced 31 batters in his seven innings of work, throwing 104 pitches, with 68 of them going for strikes.

Pitcher Kevin Quackenbush was called into throw the ninth inning marking his first save as a T-Pad, giving up no runs on no hits, while striking out two batters and walking one.

Tucson will try to extend its current win streak to three games as it takes on the Aces in the final game of this four game series.

The T-Pads pulled out another tight victory with its 6-5 contest against Reno on Tuesday June 25.

Outfielder Jaff Decker made use of the long ball in the game on Tuesday as he hit a solo shot over the right field wall in the top of the third inning to extend Tucson’s lead.

J. Decker was 2-4 on the evening hitting a single, a home run, collected one RBI and crossed home plate twice.

The home run was J. Decker’s sixth of the year.

He was one of three players to go two for four on the evening, the other two being shortstop Dean Anna hitting two singles and collected one RBI.

The other player was catcher Rene Rivera hitting a single, a double and collected an RBI.

Getting the win for Tucson was pitcher Ryan Kelly(1-0) after relieving Anthony Bass in the fourth inning.

Kelly threw one and a third inning giving up no runs on two hits while striking out one batter and walking one as well.

The win was Kelly’s first of the season as a T-Pad.

Pitcher Miles Mikolas came into to throw for the last inning and a third giving up no runs on no hits while striking out one batter, to record his team leading 15th save of the year for Tucson.

The T-Pads have a day off on Wednesday as the team heads to Colorado Springs to have a five game series against the Sky Sox, starting with a double header on Thursday.

Tucson pulled off victories in both of the games in its double header on Thursday June 27 against the Sky Sox.

In the first game of the double header the T-Pads won the game 7-4, collecting 12 hits as a team. 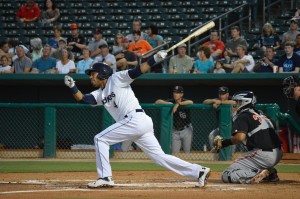 Second baseman Jonathan Galvez had the only long ball of the game, as he sent a two run shot flying over the left wall in the top of the seventh inning.

Galvez went 2-4 on the evening, hitting a single, a home run, collected two RBIs and crossed home plate once. The home run was Galvez’s sixth of the year.

There were three other hitters for Tucson that had two hits on the night; outfielder Daniel Robertson, shortstop Dean Anna and outfielder Ben Francisco.

Pitcher Brad Bach(2-1) recorded the victory after coming in into the fifth inning to relieve pitcher Brandon Kloess.

Bach threw for an inning and a third giving up no runs on two hits, while striking out one batter and walking none. It was Bach’s second win for the T-Pads.

Pitcher Colt Hynes came in and threw the last inning and two-thirds to record his fourth save with Tucson.

He gave up no runs on no hits while striking out three batters and walking none.

The T-Pads also claimed victory in the second game of the double header, which was a make-up game from April 10.

Tucson pulled out the late inning 5-4 victory in the second game, with assistance at the plate from Petit.

C. Decker also had his bat play a part as he was 2-4 hitting a single, a double and collected an RBI.

Outfielder Brandon Allen had the only home run of the game hitting a solo shot over the right field wall in the top of the third inning.

The home run was Allen’s ninth of the season.

Quackenbush recorded the win for Tucson, giving him two wins as a T-Pad, after pitching in the fifth and sixth innings of the game.

In his two innings of work Quackenbush gave up one earned run on one hit while striking out one batter and walking two.

Pitcher Miles Mikolas came in and threw the final inning of the game for Tucson and gave up no runs on one hit, to record his 16th save of the season, which leads the team.

The T-Pads will look to extend its win streak to six games when it takes on Colorado Springs in game three of this series.

Tucson was unable to string any hits together as it lost 4-2 on Friday June 28.

The team only managed six hits in the game and only one player managed to have a multi-hit game.

Robertson was 2-4 on the evening hitting a single, a triple and crossed home plate once.

Tucson didn’t give itself many opportunities to score as the team was 1-4 with runners in scoring position and leaving four runners stranded.

Kelly(1-1) recorded the loss for Tucson after relieving Matt Andriese in the sixth inning of the game with the game tied.

Kelly threw two and a third innings giving up two earned runs on three hits while striking out two batters and walking none.

Tucson will try to rebound as it has two more games against the Sky Sox.

The T-Pads took another tough loss against Colorado Springs on Saturday June 29, losing 5-2.

Tucson ended the game as a team with seven hits and three players accounted for six of those hits on Saturday.

Galvez went 2-3 hitting a single, a double and collected one RBI.

Allen went 2-3 hitting a single, a double and crossed home plate once.

The final batter with two hits was Rivera, going 2-4 hitting two singles, collected an RBI and crossed home plate once.

Pitcher Josh Geer(0-1) made his first start for the T-Pads on Saturday, after being promoted from the San Antonio Missions on Friday. He threw four innings in his losing effort.

In his four innings of work Geer gave up three earned runs on five hits while striking out one batter and walking two.

With the series tied at two games a piece Tucson will try to come out on top in the final game of the week against Colorado Springs.

The T-Pads put a hurting on the Sky Sox, in the final game of the series and the month on Sunday June 30 in a 14-1 victory.

Tucson had a total of 21 hits in the game with four players having collected three hits or more.

Tucson capitalized with runners in scoring positions, the team was 13-23 on Sunday which is a drastic improvement.

The offense wasn’t the only contributing factor in Tucson’s massive victory.

Pitcher Jorge Reyes(5-3) recorded the win for the T-Pads after relieving O’Sullivan in the fourth inning.

Reyes threw for one and two-thirds innings giving up one earned run on five hits while striking out two batters and walking none.

O’Sullivan gave up no runs on one hit while striking out three batters and walking one in his three innings of work.

Tucson used three other pitchers; Brad Boxberger, Ryan and Mikolas to finish off the blow-out on Sunday.

The T-Pads will try and keep the momentum going as well as stay ahead of the rest of the division when it heads to Sacramento for a three game series before coming back home to Kino Stadium for a four game series against Las Vegas.