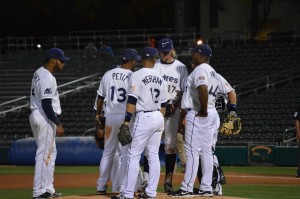 Tucson is third place in the division and is only a game and a half behind the first place Fresno Grizzlies and are a only a game behind the second place Sacramento River Cats.

The T-Pads extended its win streak to four games in a row, by defeating the Express 6-5 on Monday May 13.

Pitcher Thad Weber(4-1) started the game for Tucson and threw seven innings while giving up two earned runs on seven hits while striking out five and walking none.

However, Weber ended up with a no decision in the the game as the relief pitching staff was unable to hold the lead for Weber.

Pitcher Brad Boxberger in his two-thirds innings of work in the ninth gave up two runs and left a runner on second base before being replaced by pitcher Colt Hynes.

Hynes after getting the first batter he faced to line out, threw two consecutive wild pitches, that allowed the runner to score from second base, which was charged to Boxberger, tying the game at five.

That marked the first blown save of the season.

Pitcher Miles Mikolas(1-1) got the win, his first of the season after holding the Express in the top of the 10th and Express pitcher Lisalverto Bonilla made a wild pitch that allowed Tucson’s Cody Decker to score from third.

Third baseman Jesus Merchan had a tremendous performance at the plate on Monday going 3-3 hitting two singles, a double and scoring once.

Tucson will be looking to extend it’s winning streak to five games as well as going for the sweep of the Express taking them on in the final of a four game series tomorrow in Round Rock.

The T-Pads completed the sweep and got it’s fifth consecutive against the Express in a 12-1 victory on Tuesday May 14.

Pitcher Wilfredo Boscan(1-1) got the win on Tuesday, marking his first of the season after throwing five innings giving up no runs on four hits while striking out one and walking none.

Tucson racked up 20 hits as a team, setting a team high for the year on hits in a single game.

Rivera got four of those hits as he was 4-4 on the evening hitting three singles, a double, collecting one RBI and scoring twice.

Merchan was 3-3 in the victory over Round Rock hitting three singles, collecting an RBI and scoring once.

There were two other players who got three hits, they both were 3-4. Left fielder Jonathan Galvez hit two singles, a double, collected three RBIs and crossing the plate three times as well.

The T-Pads get the day off tomorrow as the team prepares to head to Iowa to take on the Cubs in a four game series.

Tucson will hope to increase it’s win streak to six games on Thursday in its first game of the series against the Cubs Triple-A affiliate.

The T-Pads were shutout in a close game on Thursday May 16, losing the game 1-0.

Tucson wasn’t able to drive in any runs, while only getting four hits on the night. The four hits for the T-Pads were because of two players.

Pitcher Clayton Richard(0-1) made his first start for the T-Pads in his rehab assignment, throwing six innings giving up one earned run on four hits while striking out eight and walking none.

It was a strong outing from Richard, but he still ended up with the loss after the team was unable to get the bats going behind him.

Tucson will try to get the bats to come alive in the second game of the series against the Cubs tomorrow.

The T-Pads were able to pull out the victory on Friday May 17 beating the Cubs 9-8.

Pitcher Robbie Erlin started the game and threw four and two-thirds innings giving up six runs, four earned on 12 hits while striking out four and walking none.

The next pitcher to come into the game was Nick Vincent(3-3) who got the win making it three wins on the season for Vincent.

Vincent only threw a third of an inning giving up no runs on no hits while not striking out and walking none.

Pitcher Miles Mikolas recorded his sixth save of the season, which leads the team, after throwing one and a third innings giving up two runs on two hits while striking out none and walking one.

Tucson will look to continue the production at the plate against the Cubs tomorrow in the third game of the series.

The T-Pads pulled out a 4-2 victory over the Cubs on Saturday May 18.

Pitcher Sean O’Sullivan(3-2) started the game and got his third win of the season after throwing seven innings giving up two earned runs on six hits while striking out four and walking one.

O’Sullivan effectively used the strike zone on Saturday throwing a total of 90 pitches and 60 of them were for strikes.

Pitcher Brad Boxberger came into get the last out of the ninth inning getting him the save, which is his fourth on the year.

Catcher Yasmani Grandal who his on a rehab assignment had good first appearance at the plate as he was 2-4 hitting two singles, collected an RBI and scored once.

Shortstop Gregorio Petit also had a good showing at the plate as he went 2-4 as well, hitting a single, a double and collected an RBI.

Tucson will need to get more key hits with runners in scoring position as the team was 3-14 on Saturday and stranded eight runners on the base paths.

The team will be looking to add another win in the column tomorrow when they play the fourth and final game of this series.

The T-Pads lost to Iowa on Sunday May 18 7-3 splitting the four game series with the Cubs.

Boscan(1-2) got his second loss of the season after throwing four innings giving up seven earned runs on nine hits while striking out two and walking two.

At the plate Robertson went 3-5 hitting three singles, collected an RBI and scored once.

Allen was 2-3 hitting two singles and collected the other two of the three RBIs.