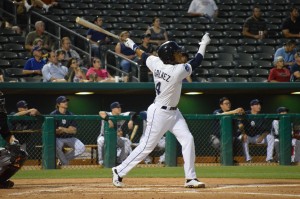 The Tucson Padres finished off its seventh week of play with one off the roughest weeks the team has had.

Tucson was 2-5 on the week after finishing off a four game road trip against the Omaha Storm Chasers and then coming back home to lose the first three games of a four game series against the Sacramento River Cats.

The week did not start out great for the T-Pads as the team was unable to overcome the Storm Chasers and lost the game 11-8 on Monday May 20.

Tucson had the lead for most of the game until the sixth inning when Omaha tied it up 7-7. The T-Pads retook the lead in the top of the seventh tacking on one more run, but then lost control of the game giving up four runs over the seventh and eighth innings.

Pitcher Brandon Kloess got the start for the T-Pads on Monday as he threw five innings giving up three earned runs on two hits while striking out seven and walking two.

Kloess got a no decision in the contest and it was pitcher Brad Boxberger(0-2) who ended up with the loss, his second of the year.

Boxberger threw two innings and gave up four earned runs on five hits while striking out one and walking none.

At the plate second baseman Dean Anna was 3-5 hitting a single, two doubles, collected two RBIs and scored once.

Designated hitter Rene Rivera also had a great night at the plate as he was 2-5 hitting a single, a home run, collected one RBI and scored once.

Rivera’s solo shot in the fifth inning was the only long ball on the evening for Tucson, the team’s last home run came from outfielder Jaff Decker on Friday May 10.

It was Rivera’s second home run of the season with his first having come over a month ago on Opening Day Thursday April 4.

Tucson will try and rebound in it’s second game against the Storm Chasers.

The T-Pads took the extra inning 5-2 victory over the Storm Chasers on Tuesday May 21.

Pitcher Clayton Richard started the game for Tucson and threw six innings giving up two earned runs on six hits while striking out four and walking none.

However, Richard ended up with a no decision, while pitcher Brad Brach(1-0) who came into the game in the eighth inning and had an inning and a third of work recorded his first win of the season.

Brach gave up no runs on no hits while striking out none and walking one.

Pitcher Miles Mikolas recorded his seventh save of the year after working the tenth inning allowing no runs on one hit and not striking out or walking a batter.

Rivera had the only extra base hit for the T-Pads on Tuesday, with team only totaling five hits.

Rivera, who started the game at first base was 1-4 hitting a double and collected an RBI.

No one on the team had a multi-hit game, the other four hits came from outfielder Daniel Robertson, shortstop Gregorio Petit, catcher Yasmani Grandal and third baseman Jonathan Galvez.

Tucson will hope to turn this into a winning streak as the team faces the Storm Chasers in the third of a four game series tomorrow.

The T-Pads made it a two game win streak after defeating Omaha 7-5 on Wednesday May 22.

Tucson dug a bit of a hole to start out with as the team fell behind early on, after pitcher Robbie Erlin threw four and two-thirds innings giving up five earned runs on five hits while striking out five and walking two.

Pitcher Nick Vincent(4-3) then came into the game to finish off the fifth inning and threw the sixth inning as well.

He gave up no runs on just two hits while striking out and walking one batter each. It marks Vincent’s fourth win of the season.

Mikolas also recorded his eighth save of the season after throwing one inning giving up no runs on no hits while striking out one and walking none.

After having the pitching stabilize the T-Pads bats were able to take advantage as the team finished off the night with 14 hits, seven of which were doubles.

Rivera was also 2-4 on the evening hitting a single, a double, collected two RBIs and scored once.

Galvez also had a notable night as he was 2-5 hitting a double, a triple and scored twice.

Tucson will look to extend the win streak along with possibly claiming the series against the Storm Chasers in the final of this four game showdown.

The T-Pads ended its series against Omaha in a split after losing 5-1 in the final game of the series on Thursday May 23.

Pitcher Sean O’Sullivan(3-3) received the loss in the game on Thursday, his third of the season, after throwing six innings and giving up four earned runs on eight hits while striking out four and walking two.

Tucson was unable to string any hits together to be able to push runners across the plate, the team only had a total of six hits, with no single player having multiple hits.

Three of the six hits were doubles, with the other three being singles. The three players that hit the doubles were Anna, Rivera and left fielder Mike Wilson.

Tucson will try to get the bats going as the team returns home to Kino Stadium to take on the River Cats in a four game series.

The T-Pads took its second loss in a row on Friday May 24 losing a 5-2 contest to Sacramento.

Tucson put up some hits against the River Cats as the team accumulated 12 hits in the game, the hits just didn’t come in key situations as it was 2-7 with runners in scoring position and leaving nine runners stranded.

Galvez was 3-3 on the evening raising his batting average to .298 for the season. All three of his hits were singles.

Left fielder Travis Buck did his part at the plate as he was 2-4 hitting a double, a home run, collected two RBIs and scored once.

The game was lost in the later innings as starting pitcher Wilfredo Boscan threw six innings giving up two earned runs on five hits while striking out three and walking two.

Boxberger(0-3) ended up getting the loss on Friday night, his third of the year, as he gave up one earned run on three hits while striking out two and walking one over his two innings of work.

Outfielder Daniel Robertson only saw one at bat in the game as he was ejected in the third inning after arguing over a call with umpire Spencer Flynn.

Tucson will try to end its current two game skid as it will face off against Sacramento in game two tomorrow.

The T-Pads losing skid increased to three games as it dropped 7-4 in an extra innings contest against the River Cats on Saturday May 25.

Tucson had the lead going into the eighth inning, but Mikolas gave up runs which tied the game at 4-4. Mikolas recorded a blown save for the game, his second of the year.

Then when Brach(1-1) came on to work the 12th inning he gave up three earned runs on three hits while striking out two and walking none. It was enough to finish off the T-Pads as the team was unable to retaliate giving Brach the loss, his first of the year.

At the plate Grandal had the best performance as he went 3-5 hitting two singles and a double.

After going 3-10 with runners in scoring position Tucson will look to get more hits in key situations as to put a stop to its current losing streak.

The T-pads took a giant loss in its third game against the River Cats, giving up 10 runs in the first inning in its 20-5 contest on Sunday May 26.

Pitcher Jorge Reyes(3-1) started the game, but only threw two-thirds of an inning giving up eight earned runs on six hits while striking out one and walking three. The loss marked the first one of Reyes’ season.

It did not get any better after Reyes came out of the game, next in was pitcher Eddie Bonine who threw four and third innings giving up seven runs, six earned on 13 hits while striking out none and walking two.

Next in was pitcher Jairo Gomez who threw two innings giving up five runs on three hits while striking out none and walking three.

The bright pitching spot on the evening was infielder Jesus Merchan who came into pitch the last two innings of the game.

He gave up no runs on two hits while striking out none and walking one.

At the plate Tucson was not as productive as its counter part, but did have some shinning moments.

Buck was 2-2 hitting a single, a double and collected one RBI.

Tucson will hope to try and climb up in the league standings as it takes on a league rival in the coming week.

With that the T-Pads will try and end its four game losing streak and try and prevent the sweep when it takes on the River Cats in the fourth and final game of this series on Monday.

After finishing up with Sacramento the T-Pads will be welcoming the Fresno Grizzlies to town for a four game series.

Once done with the Grizzlies Tucson will head out to Reno to take on the Aces in a four game series.