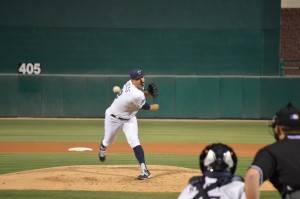 The Tucson Padres finished off its eighth week of play with a 6-1 record for the week, getting the team one game away from the division leading Sacramento River Cats.

The T-Pads sit five games above .500 with a season record of 31-26. This being a drastic improvement from last year.

Tucson started off the week claiming fourth game against the River Cats and then welcomed the Fresno Grizzlies to town and beating them three out of four.

After that the team took to the road to take on the Reno Aces at Aces Ballpark.

Tucson started of its eighth week of play this season with a 2-0 victory over its division rival and leader Sacramento on Monday May 27.

It was the final game of a four game series and with the win the T-Pads were able to avoid being swept, although Tucson still lost the series.

Pitcher Robbie Erlin(4-0) got the victory on Monday as he pitched seven innings of shutout baseball as he only gave up two hits while striking out 11 batters and walking only three.

It marked Erlin’s fourth victory of the season for the T-Pads. Erlin was called back up to San Diego to start on Saturday June 1, in which he recorded his first MLB win.

Pitcher Colt Hynes recorded his second save of the year after throwing one and a third innings giving up no runs on one hit along with striking out one batter and walking none.

Tucson had a total of 10 hits in the game with only two players having a multi-hit game.

Designated hitter Mike Wilson was 2-3 hitting a single, a home run, recorded an RBI and scored once. The home run for Wilson marked his first as a T-Pad.

The other player with a multi-hit game was third baseman Jesus Merchan who was 2-3 hitting two singles and collected an RBI.

Tucson will be welcoming the Grizzlies to town for another four game series against a division rival and Tucson will be looking to turn this into a win streak.

Tucson is currently 4-4 against Fresno this season.

The T-Pads extended its win streak to two games after defeating the Grizzlies 5-1 on Tuesday May 28.

It was pitcher Burch Smith(1-0) who got the victory on Tuesday, marking his first win of the season with Tucson.

Smith threw five innings giving up one earned run on six hits while striking out five batters and walking none.

He was dominant of the strike zone as threw 73 pitches on the day with 48 of them being called for strikes.

The team wasn’t extremely dominant at the plate as the it only recorded eight hits in the game, however, once again only two players emerged with a multi-hit game.

Shortstop Dean Anna was 2-4 hitting a double, a home run, recorded two RBIs and crossed the plate twice as well.

Anna was an active part in four of the five runs that the T-Pads scored on Tuesday.

Third baseman Jonathan Galvez also hit a long ball against the Grizzlies in the Tuesday game.

Tucson will hope to keep this momentum going as it take on Fresno again tomorrow in the second game of the four game series.

The T-Pads pulled a walk-off victory against the Grizzlies on Wednesday May 29 in a 3-2 contest to extend its win streak to three.

Pitcher Sean O’Sullivan was called upon to start the game on Wednesday and he gave a strong performance.

O’Sullivan threw six and a third innings giving up one run on five hits while striking out nine batters and walking one.

O’Sullivan ended up with a no decision in the contest after pitcher Daniel Stange blew the save in the top of the ninth inning.

Stange(1-0) did bounce back and earn the win, his first of the year as a T-Pad.

Stange threw two and two-thirds innings giving up one run on one hit while striking out six batters and walking none.

On the offensive it seems to be becoming a thing as the team totaled eight hits again in the game and once again only two players had a multi-hit game. But hey, as long as the team is producing something right.

Shortstop Gregorio Petit was 2-4 hitting a single, a double and collecting one RBI.

Merchan had another multi-hit game going 2-3 with a single, a double and scoring once.

Galvez also belted another home run on Wednesday, he now has two home runs in two games. Tucson will be hoping for its bats to stay hot for the rest of the series.

Will the T-Pads be able to extend its win streak to four when it takes on the Grizzlies again tomorrow for the third game of the series?

Tucson was unable to fend off the offense of Fresno, as it was defeated 10-2 on Thursday May 30.

Pitcher Wilfredo Boscan(1-3) ended up getting the loss, making it his third of the season, on Thursday after his three and a third innings of work.

He gave up six runs, five earned on eight hits while striking out two batters and walking none.

On the offensive side shortstop Logan Forsythe was 3-3 hitting a single, a double and a triple in his first start with the T-Pads this year.

Forsythe was just a home run shy of the cycle.

Maybin had the only home run in the game for Tucson on his 1-5 night.

Outfielder Jaff Decker was the ony other player for Tucson to have a real productive night at the plate as he went 2-4 hitting a single, a double and collecting the only other RBI for the team.

Tucson was 2-13 on the evening with runners in scoring position and left eight runners stranded on the base paths.

The T-Pads will try to keep the Fresno bats at bay and try to claim the series as it plays the fourth game tomorrow.

Tucson came back with a vengeance on Friday May 31 as it defeated the Grizzlies 10-0.

Pitcher Brandon Kloess(2-0) started the game and from the first pitch it seemed it may be a bad night as his first pitch went right to the back of Gary Brown.

Kloess settled in after that and threw five innings giving up no runs on just two hits while striking out seven batters and walking one.

Kloess got the win his second of the season.

All of Tucson’s offense came in two innings, the fourth and the fifth, with the team batting around in both innings.

It was Daniel Robertson’s first time playing third base since college, however it didn’t seem to phase him as he made no errors and was 2-5 at the plate hitting two singles, collected one RBI and scored once.

First baseman Brandon Allen also had it going at the plate as he was 2-4 hitting a single, a double and crossing the plate twice.

Galvez also had a multi-hit game as he was 2-4 hitting a single, a double, collecting two RBIs and scoring once.

Tucson is now 7-5 against the Grizzlies this year and the team will now head to Reno to take on the Aces in a four game series for the first time this year.

The T-Pads move up to a two game win streak as the team defeated the Aces 8-6 in extra innings on Saturday June 1.

Pitcher Anthony Bass had his first start of the year for Tucson after being sent down from San Diego.

Bass ended up with a no decision after throwing four innings and giving up four runs on eight hits while striking out seven batters and walking none.

It was pitcher Miles Mikolas(2-1) who ended up recording the victory, his second of the season, after throwing the ninth and tenth inning giving up no runs on one hit while striking out and walking none.

Tucson’s offense kept the pressure on the Aces pitching staff, leading the charge was Robertson.

He was 4-5 hitting three singles, a triple and scoring twice.

J. Decker also had a productive night as he was 1-3 hitting one deep, collecting two RBIs and scoring twice.

Anna also contributed coming in as a pinch hitter, then he moved around the field. He went 2-4 hitting a single, a double, collecting one RBI and scoring twice.

Tucson will finish out the week hoping to extend its win streak to three games as it takes on the Aces in the second game of the series tomorrow.

The T-Pads move it up to a three game win streak with a dominating 13-5 victory over the Aces on Sunday June 2.

Smith(2-0) got his second win of the season after throwing five innings against the Aces on Sunday.

In his five innings of work Smith allowed two runs on five hits while striking out four batters and walking three.

Smith’s performance came with a lot of backup as the T-Pads recorded 18 hits on the evening.

Merchan had the most hits on the night as he was 4-6 hitting two singles, two doubles and collected three RBIs.

Maybin also hit a long ball on the evening in his 1-4 performance.

Forsythe was also impressive at the plate going 3-4 hitting a single, a double, a triple, collecting two RBIs and scoring twice.

For the second time this week Forsythe was a home run shy of the cycle.

Tucson will look to extend its win streak to four games as it will play two more games in Reno and then the team will come back home to Kino Stadium for another four game series against the River Cats.

The T-Pads are 1-3 against Sacramento this year, but Tucson will try and dethrone the River Cats in the next series.