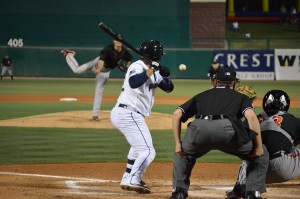 The Tucson Padres finished off its ninth week of play going 3-3 combined against the Reno Aces and the Sacramento River Cats.

The T-Pads are tied for second place in the division with the Las Vegas 51s, both teams are two games behind the division leader, the River Cats.

Tucson started off the week strong as the team extended it’s winning streak to four games, with the 4-2 defeat of the Aces on Monday June 3.

Pitcher Sean O’Sullivan(4-3) got the start on Monday and threw six innings giving up two earned runs on nine hits while striking out four batters and walking two.

In his six innings of work O’Sullivan threw 96 pitches with 62 of them being recorded as strikes in the 29 batters he faced. He was able to keep the ball down, to get 10 of the hitters he faced to ground out in his victory on Monday.

It was O’Sullivan’s fourth win of the season.

The game was scoreless until the top of the fourth inning as second baseman Dean Anna stepped to the plate to hit a solo shot to right field.

Anna was 2-3 on the evening hitting a single, a home run, collecting one RBI and scoring once.

Rivera was 1-3 that night hitting a double and collecting two RBIs, his second RBI came in the top of the eighth on a sac fly to center field.

In the top of the seventh inning first baseman Cody Decker hit a two out solo shot to left field, to put the T-Pads up 3-2.

C. Decker was 1-3 on Monday hitting the solo shot while collecting one RBI and crossing the plate once as well.

Tomorrow Tucson will try to extend its win streak to five games, along with going for its second series sweep of the year, the first coming May 11-14 against the Round Rock Express.

The T-Pads are proudly have a five game win streak as the defeated Aces 5-4 in 10 innings on Tuesday June 4. It also marks the second sweep for Tucson this season.

Pitcher Brandon Kloess faced just 11 batters in his three innings of work on Tuesday as he was pulled in the top of the fourth when his batting spot came up in the line up.

It was pitcher Jorge Reyes(4-1) who ended up recording the win for the T-Pads, his fourth of the season after throwing the ninth inning.

Reyes gave up no runs on one hit while striking out and walking none.

Pitcher Miles Mikolas came in to pitch in the 10th inning of the game and getting his 10th save of the year.

Mikolas gave up no runs and no hits while striking out one batter and walking none.

Leading the charge for the T-Pads offensively was Maybin wwho was 3-6 hitting two singles, a home run in the top of the 10th giving Tucson the go ahead run, also collecting one RBI and scoring once.

First baseman Brandon Allen also had a productive night at the pale as he was 3-5 hitting one single, two doubles and scoring twice.

Tucson finished the night hitting around .380 as a team, the T-Pads had a total of 16 hits in the game, however the team still seems to struggle with runners in scoring position.

Tucson was just 6-22 with RISP, which is not terrible, however the team did leave 16 runners stranded on the base paths.

The T-Pads will have a day off tomorrow as the team comes back home to Kino Stadium to take on the division leader Sacramento in a four game series.

Tucson’s five game win streak was laid to rest after the River Cats walked out of Kino Stadium with a 9-3 victory on Thursday June 6.

Pitcher Robbie Erlin(4-1) started the game on Thursday and seemed to struggle. He threw five innings giving up five runs, three earned on three hits while striking out two batters and walking four.

The T-Pads were able to put some wood on the baseball as the team finished the game with 10 hits.

There were four players who managed to get two hits a piece on Thursday.

C. Decker went 2-4 hitting a single, a home run in the bottom of the fourth, collecting one RBI and crossing the plate once.

Anna also managed a multi-hit game going 2-4 hitting a single, a double and scoring once.

There were two other players who managed to go 2-4 on the evening, second baseman Jonathan Galvez and third baseman Gregorio Petit.

Once again the T-Pads leave another double digit number of runners stranded on the bases, 13.

Tucson will try and get more runners across the plate as it will take on the River Cats in game two of the series tommorrow.

Pitcher Anthony Bass(0-1) got his second start for the T-Pads this year on Friday June 7.

Bass only managed to throw two and two-thirds innings, giving up eight earned runs on nine hits while striking out two batters and walking three, before getting lifted in the third inning.

It marks Bass’ first decision and loss of the season.

Tucson’s bats were held a bay a bit, as the team managed to get just eight hits in the game and had only one player with a multi-hit game.

Catcher John Baker was 2-3 hitting two singles and scoring once.

Outfielder Mike Wilson managed to knock his second home run of the season as he took River Cat pitcher Andrew Werner deep in the bottom of the fifth inning.

The T-Pads will hope for it’s pitching staff to hold slow down Sacramento’s offense to try and split the series with the division leader.

Tucson took another beating at the hands of the River Cats losing 10-5 in the third game of the series on Saturday June 8.

Pitcher Matt Branham(0-1) took to the mound on Saturday in his first start for the T-Pads after being called up from the Lake Elsinore Storm on earlier that day.

Branham got through three innings, giving up five earned runs on seven hits while striking out two hitters and walking three in his Tucson debut.

The T-Pads offense was held at bay again by Sacramento’s pitching, being limited to nine hits and having only two players with a multi-hit game.

Allen 2-4 hitting a single, a home run in the bottom of the eighth his sixth of the year, collecting one RBI and crossing the plate once.

Two other players hit long balls for the T-Pads on Saturday, Rivera launched a solo shot in the bottom of the sixth, his fourth of the year.

Anna sent his two run shot to right in the bottom of the seventh inning.

Tomorrow Tucson will try to stop the sweep from happening as it will take on the River Cats in the fourth and final game of this series.

The T-Pads rallied behind pitcher O’Sullivan(5-3) in a 4-2 victory on Sunday June 9.

He threw six and a third innings to get his fifth victory of season, giving up two earned runs on seven hits while striking out three batters and walking three.

Pitcher Colt Hynes came into the game in the eighth and ninth innings giving up no runs on no hits while striking out three batters and walking none to record his third save of the year.

Pitching was not the only bright side for the T-Pads on Sunday as the it also managed to put some runs on the board.

He also had two RBIs and scored twice.

Galvez was also productive at the plate going 2-4 hitting a single, a double and collecting two RBIs.

With the win in the final game of the series the T-Pads are now tied for second place in the division with the Las Vegas 51s, being two games back of Sacramento.

Tucson heads to Fresno for a four game against the Grizzlies at Chukchansi Park, before coming back home to take on the Reno Aces in a four game series.

The T-Pads will continue the fight to stay above .500 as well as the battle for first place in the division.