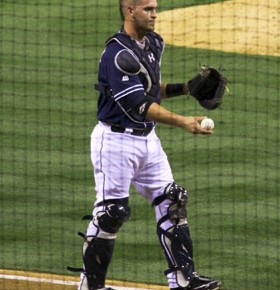 Padres catcher Yasmani Grandal’s 2013 campaign may be over just as soon as it had started. And even worse, the middle infield could be broken up for the team as well – sans a double play – with the potential loss of shortstop Everth Cabrera. According to ESPN’s TJ Guinn and Mike Fish, Major League Baseball has announced that the commissioner’s office is seeking the suspension of 20 players who have connections to Biogenesis of America – a “nutraceutical” clinic in a southern Miami suburb that has allegedly distributed performance enhancing drugs (PED’s) to several ballplayers in the league including Alex Rodriguez of the Yankees and Ryan Braun of the Brewers.

The clinic came to light after Braun was implicated in February 2013 with several other big name players in a report by Yahoo! Sports. Anthony Bosch, the founder of Biogenesis, has reached an agreement with MLB to aid the office’s investigation in connecting players who have potentially violated the league’s anti-doping policy by using PED’s distributed at his clinic. Among those 20+ players that are accused of purchasing and using such PED’s? The Padres own Yasmani Grandal and Everth Cabrera.

Yasmani Grandal, in his second big league season of his career, had just come off of a 50-game suspension for having elevated testosterone levels during a mandatory drug screening last season. Grandal had admitted to using performance enhancing drugs calling his decision “a mistake,” and was also listed as one of Bosch’s clients in records released in a January 2013 report by the Miami New Times. The reason for Grandal’s visit to the anti-aging clinic was unclear and not disclosed by either The Padres organization or Grandal himself. Nonetheless, Grandal’s confession and cooperation with MLB ultimately resulted in a suspension for the young backstop.

Everth Cabrera’s connection to Biogenesis is a little more inconspicuous as Cabrera, along with then-Padres minor league pitcher Fautino De Los Santos, were listed as clients who had only potentially purchased PED’s. Despite Cabrera’s name having shown up in Bosch’s records, Cabrera has not been accused of nor found guilty of abusing such illegal substances. Cabrera has posted solid numbers so far in the 2013 season, batting .273 with 22 RBI and continuing his trend of leading all Major League Baseball players in the category of stolen bases with 23 in total. If Cabrera were to face suspension, which MLB has stated could be a punishment of a 100-game suspension, The Friarhood’s own Steve Adler suggests that infielder Logan Forsythe could be a possible replacement following his excellent performance while rehabbing with Triple-A Tucson.

If Bosch’s aid to MLB’s investigation is successful and the suspensions are upheld, then the Biogenesis PED scandal would be the largest of its kind in the history of American professional sports. The 100-game suspension is the standard punishment for a second-time offense when it comes to drug abuse in Major League Baseball, but the commissioner’s office is seeking this suspension as a way of implying a two-part offense: the consumption of PED’s and lying to the organization. The Major League Baseball Player’s Association (MLBPA) has been cooperative with MLB in providing player’s testimony and access to investigators, but worries that too much of an investigation will put players at risk of increased liability – essentially damaging their careers.

More details on Grandal and Cabrera’s implication in the PED scandal will come as the story develops.