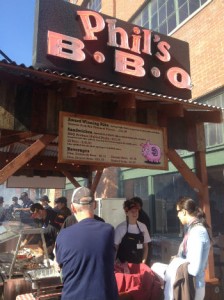 Ask any native San Diegan and they will tell you – two great things happened in San Diego during 1998 – The Padres went to the World Series and Phil’s BBQ was established.   It’s only fitting on the 15th anniversary, Phil’s and the Padres would come together to offer great BBQ to baseball fans while taking in a game at the park.

Phil’s BBQ adds to the new cuisine found at Petco this year.  Call it lucky, call it genius, but don’t call me late for dinner!  Adding this delectable choice to the park gives visitors a taste of San Diego that one may not find otherwise.

I must say, I am a frequenter of Phil’s in Point Loma, but often find myself too hungry to wait in line for food.  So, while at Opening Day for the Padres, I took advantage of a short, 5-minute line and grabbed my favorite Phil’s sandwich, the El Toro, while watching the game from the Park in the Park viewpoint.

The El Toro is made on a signature bun with deli sliced tri-tip and Phil’s secret recipe BBQ sauce.  This sandwich is piled high and slathered in sauce – made to be shared and eaten with a fork.  I did not expect the sandwich to be just like the one I get at the restaurant, but I was pleasantly surprised to taste the familiar tang of the sauce, the melt-in-your-mouth quality of the tri-tip and the soft sponge of the bread.  This was just like the original! 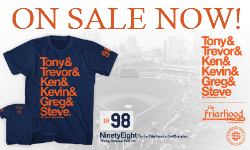 The only down side to Phil’s at the park – the menu is limited to 4 items.  While these items are arguably the “Best Of” Phil’s, some locals may be disappointed.  Given the alternative, I will take a limited menu over any other BBQ in town.  The beer selection at this booth is mostly domestic, some import and no craft beers. Lucky for the discerning eater who prefers a craft beer, there’s plenty around the park this year.