What to Do with Volquez – Fans Chime In 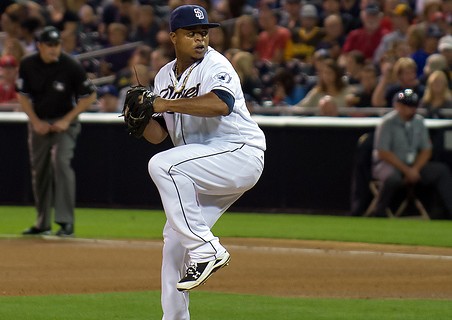 Yesterday, we posted a question on our Facebook page asking you all, “At this point in the season, how do you feel when Volquez takes the mound for the #Padres?”

Once again, your response was awesome as we received 61 comments.

Currently, the Padres sit 18.0 games out of first place in the NL West and 14.5 games behind the NL Wild Card leaders. They have 34 games left to play this season, and starting in September, teams can have as many as 40 players on their active roster.

For the past couple years, fans have heard about how talented and deep the pitching depth is for the Padres in their minor league system. And according to a vast majority of your responses to our Facebook question, at this point in the season, you’d rather see some of those young guys on the mound in place of Edinson Volquez. Here’s a look at what some of you had to say:

– “Well the thing about Volquez is he’s either really on or really off. We’ll either shut out or get trampled. More often than not tho, he is off.” -Ryan Stall

– “Honestly, I’m hopeful when Volquez pitches. There have been times that he’s lights out and gives the Padres a great chance to win the ball game. He has struggled this year, but so has the rest of the rotation. Still no reason not to keep the faith!” -Aaron Waldron

– “like I did at the beginning….I’d ask myself: “is he going to get all emotional on the mound and start screwing up?” too bad, he did have moments of great pitching….I wish he could have been more stable…” -Isabel Apostol

– “Like he could possibly pitch a no-hitter with a couple walks, or that he’s gonna give up 8 earned runs. Nothing really in between…. Haha” -Jess Uithoven

– “I feel like he’d be a reasonably good, maybe even ideal, 5th starter. Skip him whenever possible, he’s normally pretty healthy and can occasionally dominate. The problem is he’s not the 5th starter.” -Bryan Clark

– “Wasting starts that could be used to try out new arms.” -Mark Ellingson

– “Maybe the young guns are hitting their innings cap. Probably not, but there could be a ton of reasons why he is still playing.” -Tony Raso

– “Very uncertain about which Volquez will show up today. We need a pitcher we can at least count on most of the time.” -Tricia Neely

– “The same way I did when Ryan Leaf played for the Chargers.” -Jeff Murray

In other words, most of you are on board with the idea that it is time for the Padres to #PlayTheKids.