Why Moving the Fences at Petco Makes Sense 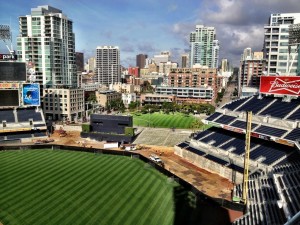 The time has finally arrived.  The Padres have seen the light and are moving in the fences for 2013 and beyond.  It’s really a shame that it has taken this long to get to this point, but I give a lot of credit to Josh Bynres and AJ Hinch for making the move.

The park was built when guys were juicing and if baseball was the same now as it was a decade ago, the old dimensions made sense, but it’s not and I’m glad to see the Padres take a step into the current baseball climate.  I’m not sure anyone is more excited than Phil Plantier, for years the Padres hitting coach job was a revolving door, at least now he will have a fighting chance.

Beware, this does mean the margin for error shrinks.  The Padres for a long time have been able to get away with bad defense, terrible base running, and walking too many hitters.  Petco was able to hide a lot of those faults, but with the move, bad baseball is more likely to result in runs on the board for the opposition.  Both teams need to play in the park, but it’s important that the Padres play more disciplined.

For those reading, you are more than likely a hard core fan and would attend games no matter the dimensions of the park.  This move isn’t for you.  This move serves a purpose on and off the field.  Let me go ahead and make a few points.

For those of you that may wonder why the Padres don’t just try and take a page out of the Giants book.  The truth is that the Padres are a poor man’s Giants team.  The Giants are committed to winning every game 1-0 if that’s what it takes.  They spent almost as much on their rotation as the entire Padres roster.  The Giants bullpen is lights out and when they need a bat they move a top prospect to go get a proven bat, Pence, Pagan, Melky in point.  Easier said than done.

This move is for the casual fan.  The casual fan doesn’t go to a game to see a pitching duel, or a sacrifice bunt, they go to be entertained.  We have all heard people say, “baseball is boring”.  The truth is that baseball at Petco can be boring, especially prior July 1.  The casual fan that only goes to a few games wants to see runs, they don’t sit in awe watching Edinson Volquez allow one run over five innings, while walking four.  They want to see scoring, lead changes, and even a… Homerun.  As the saying goes, “Chicks dig the long ball”

On the field the ability to attract and retain hitters cannot be overstated.  The word is out that Petco suppresses offensive stats and combating something like that is very difficult.  As an organization you have to bring more to the table if you want to attract talent.  Intangibles, such as a winning track record, history/tradition, sell-out crowds, or over pay for a player.  The Padres do not fit into any of those slots, which is why fans have had to settle for the likes of the Orlando Hudson and Brad Hawpes’ of the world.  Most of the best hitters the Padres have had over the last decade were unhappy playing at home.  Frustration, the effect on team chemistry, and then eventually the impact on a player’s ability to earn more financially can wear on even the most mentally strong people.

Predicting how the park will play at this point is pure speculation.   Assuming the park plays fair and more runs are scored, baseball will be more entertaining.  Position players won’t have extreme splits and hitters won’t be so apprehensive to coming/staying in San Diego.

What we do know is that the pitching staff will not be able to lean on the park as they have for many years.  The issues that have plagued the Padres, such as poor base-running, mental mistakes, and lack of execution will have to be eliminated if this team is going to finish better than 4th place in the NL West, regardless of the fences.