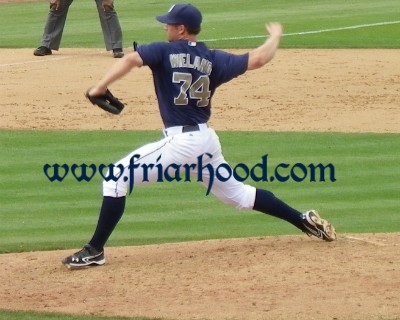 The bad luck continues for San Diego Padres pitchers. On Saturday, Joe Wieland made his first spring start and 4th spring appearance with the Padres. The results weren’t great – he allowed 5 runs over less than 3 innings. However, the aftermath of the start was worse.

If Wieland has indeed torn his UCL that could mean a second Tommy John surgery, which would likely result in him joining Cory Luebke on the DL for the 2014 season. Both Wieland and Luebke were expected to contribute and make their first major league appearances since early 2012 for the Padres this season, but there is now a significant chance that we won’t see either of them until 2015.

About the author: Alex Bartlett

Three weeks after I was born, Padre legend Tony Gwynn visited my hospital and handed out teddy bears to all the newborn children, including me. I have been a Padre fan ever since. Whether SD is in the midst of an exciting playoff run, or an uneventful off-season, I love following them and I love writing about them.