Join the Congregation!|Tuesday, April 20, 2021
You are here: Home » Chris Kelly » Will Venable be Worth It?

Will Venable be Worth It?

Let me start by saying that I like Will Venable. A lot. I’ve met him and have read a good deal about him. There’s lots to like. Outside the clubhouse, Venable has many intangibles. He’s active in the community, generous, humble, intelligent, gracious. Just a good guy. On the field, there are also some skills he brings. Good frame, speed, defender, a decent bat (.252/.323/.415). 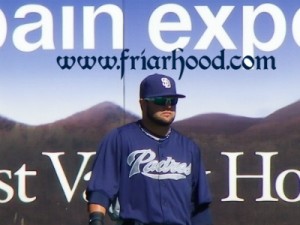 Is Jaff Decker a cost effective replacement for Venable?

The fans have been given a standing narrative about Venable, and it generally goes something like: he came late to baseball (basketball kept him from focusing on it) but will blossom into a solid everyday player with the possibility of all-star potential. Well, Venable is officially 30+, and I think it’s safe to say that the waiting is over.

A good case in point is Sunday’s (5/19) game. A struggling Dan Haren is pitching for Washington in the bottom of the first. Everth Cabrera laces a single to left and steals second. Chase Headley draws a walk. Carlos Quentin drives a double into the left field corner. Yonder Alonso clubs a sac fly to deep right. Jedd Gyorko doubles inside the third base bag. Kyle Blanks flies out to the warning track in center. What did Venable, hitting second in the lineup, do? Strikes out. [Note: as so often happens, he later clubbed one out to right and made a nice back-handed grab as I penned this piece.]

Granted, in the larger context, the platoon of Denorfia and Venable has been a solid one for the Padres, dating back to last season. However, going forward, there are a few things to consider. First: is Venable fulfilling his lefty role in that platoon? Second (really 1A): is the salary justified?

The two issues are related, so let’s look at them in unison. Venable is making $2.7M this season, up from $1.5M last season. That accounts for 3.80% of the team’s salary. As it stands, his total WAR for 2013 is 0.4. Clearly, we’re not getting the proverbial bang for the buck here. Additionally, his value at the plate should be in his lefty swing. So far, he’s hitting .237/.311/.419 against righties, down about 30 points all around from last season. Now, Venable is a player who typically performs better in the second half (.324 and .279 in Aug and Sept last season), so he’ll likely finish the season at or near his career line. Given the state of arbitration (Venable is eligible next season), his salary will likely remain the same or even increase.

The question I have for you is, would you like that $2-3M to go to Venable, or would you prefer it go to a different player…perhaps part of a long-term contract to Chase Headley, for example? Before you answer that, let me give you some of the replacement options. And note, they’ll all be considerably cheaper.

Option #1: Jaff Decker. LHB. Decker has spent six seasons in the Padres’ system, owning a career MiLB line of: .263/.403/.455. Currently, he’s hitting .254/.367/.403 in AAA Tucson. Decker has some pop in his bat and has a good eye. Against RHP, Decker is hitting .269/.365/.429. Despite his build (5’10” 190lbs), he is a good defender with a strong arm. Decker would be making his MLB debut, so the salary will be a fraction of the cost of Venable. Conclusion: Decker would be a downgrade on the basepaths and a slight downgrade with the bat and the glove, but he might be justifiable in the overall cost analysis.

BEST OPTION: Daniel Robertson, RHB. Robertson has done nothing but hit in his six minor league seasons. Overall, his career line is: .307/.384/.415. This season, Robertson is hitting an impressive .313/.395/.442. Another ‘despite the frame’ guy, Robertson’s size (5’8″ 175lbs) doesn’t prevent him from being a strong defender, capable of making the big play. He’s quick to the ball and takes good routes. Even more impressively, Robertson is hitting .336/.404/.482 against right handed pitching. Robertson, much like Decker, would be making his big league debut. Conclusion: Robertson could likely be an upgrade with the bat, a wash on the bases, and an only a slight downgrade (if at all) in the field. Robertson, like Decker, would be making his debut, so the salary would be significantly less. This move would make sense.

The ultimate conclusion seems to be that Venable’s production could be replaced at a fraction of the cost. The team could likely find a match through trade, freeing up the money to go in any number of directions: Headley’s deal, a starting pitcher, Everth Cabrera‘s arbitration, etc. The other factor to consider here, as well, is the return of Cameron Maybin.

But that’s an article for another day.