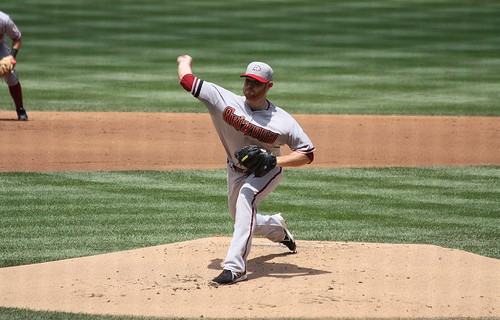 Since August first the Padre organization and their fans have gotten a sneak-peak at what may well prove to be an effective starting rotation next season. Youngsters Andrew Cashner and Tyson Ross have shown off their tremendous upsides and are rapidly developing into solid starters with top-of-the-rotation potential. Meanwhile, trade deadline acquisition Ian Kennedy has flashed some improvement since changing his home address from the dry desert of Arizona to the more temperate climate and friendly confines of San Diego. If Kennedy reverts back closer to the form he displayed in 2011 the Padres will have three excellent core pieces for their rotation.

Consider this about Cashner; since the calendar flipped to August, he has an ERA of 2.25 in 40 innings and has a K/BB ratio of 2.9:1. His WHIP during this stretch has been 1.18. That’s pretty solid stuff and belies the 1 – 3 won/loss record he has compiled in that time.

Cashner, who has always had the ability but had yet to show the durability required to be a top-notch starter, is proving his powerful right arm can stand up to the rigors of throwing 180+ innings a season. He just crossed the 150 innings threshold and his fastball hasn’t lost any velocity (average speed in his last start was 96.4 MPH, tied for the highest average velocity in any outing this year). I hate to get ahead of myself but seeing his performance of late has been encouraging and makes me feel better about trading Anthony Rizzo for him.

As for Ross, he’s making GM Josh Byrnes look pretty smart for pilfering the former second-round pick from Oakland this offseason for minor league utility infielder Andy Parrino and LHP Andrew Werner; neither of whom have made much of an impact at the big league level for the A’s. Like Cashner, Ross has come on of late since being reinserted into the starting rotation near the end of July. He’s thrown at least six innings in seven of his last eight starts and has walked two or fewer batters in six of those outings. During that same stretch Ross has allowed two or fewer runs six times; including a run of five consecutive at one point. His ERA in August was 3.34 with a WHIP of just 1.11. Ross has done a good job of limiting bases on balls with a K/BB ratio of 3.2:1 and that is key for a guy like Ross.

Kennedy hasn’t been great since coming to San Diego but he’s been better than he was prior to the trade. He’s dropped his ERA roughly ¼ of a run since the deal and hopefully is working his way back into being a quality starter.

The big thing for Kennedy, as it is with any pitcher, is limiting walks. When he won 21 games for Arizona in 2011 Kennedy allowed 2.2 free passes per 9 IP. This season he is issuing nearly four per 9 IP. He’s maintaining his K/9 rate at 7.9, exactly his career mark but has to cut down on the walks to be successful. When Kennedy pitches six or more innings and issues two or fewer free passes his ERA this season is 3.39.

Kennedy has also been a little unlucky this season according to the advanced stats. His HR rate is roughly 40% higher than the league average and his xFIP (Expected Fielding Independent Pitching) is nearly ¾ of a point lower (4.36) than his actual ERA (5.10). If Kennedy cuts down on the bases on balls and he maintains his other peripheral stats he should be no worse than a good 2/3 starter moving forward.

With Cashner and Ross beginning to realize their potential and evolving into quality top-of-the-rotation arms and the hope/possibility/probability (pick a word) that Kennedy is actually better than he’s pitched this season, the Friars have the pieces necessary to assemble an excellent rotation. Having those building blocks in place gives Byrnes some flexibility this winter when it comes to improving the roster. The success of this trio of hurlers won’t preclude Byrnes from making any additions to the rotation but if he is unable I’ll feel better about the returning starters than I did last winter.